The Challenge: For this challenge, you get to be the detective! Either use clues from multiple recipes to make a composite recipe, or choose a very vague recipe and investigate how it was made.

Like a lot of other participants in this challenge, I no longer have too much difficulty in reading period recipes. What I did for this one was read a lot of different versions of the same recipe, pick one I liked the best, but incorporate some elements from other versions. I opted for Welsh Rarebit. So many of the references I ran across made fun of the name and there were several short stories about tourists who kept expecting a delicious rabbit dish. As a child, I had asked my mother to make "that Jewish dish, Welsh Rabbi," so I could relate to the poor tourists.

Obviously, I've loved Welsh rarebit since childhood, so I was excited when I realized it was a historic recipe. I first realized that cheese toast and Welsh Rarebit were one and the same, by reading The Cook's Oracle (1817), which I've been focusing on for these challenges. 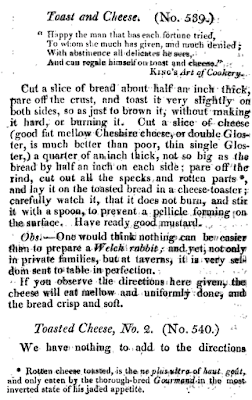 I grew up eating it with crumbled bacon and sometimes a tomato. I've occasionally made the Campbell's Soup version. It's really one of my favorite winter comfort foods. Part of my preparation for this challenge involved looking at some of my vintage cheese books (1955 and 1977) for how Welsh Rarebit gets made today. The 1977 version has 65(!) different rarebit recipes, and I've long been tempted to cook my way through them all.

For my master recipe this challenge, I settled on this entry from The Domestic Dictionary (1842):

WELCH RABBIT. Melted cheese served upon toasted bread. The real name of this dish is rare-bit, which has been corrupted down to rabbit. A foreigner, who, on arriving in England, should see Welch rabbit on the card of a house of public entertainment, and, referring to his dictionary, should find that the French of Welch rabbit is lapin du pays des Galles, would be astonished, if he ordered it by the English name, to see some toasted cheese, instead of a rabbit of rich flavour peculiar to Wales. As there is an art in the roasting of eggs, so there are three arts in making Welch rabbits. The first is to choose good cheese; the single Gloster, when not too old, is one of the best for this purpose; the next is to toast the bread carefully, that it may be crisp; and, lastly, to watch the turn of the cooking, and take care that the toast be hot when the cheese is spread upon it; the crust is usually pared off the bread for toasting, but this is not an improvement. The cheese should be melted in a cheese toaster before the fire, cutting it first into thin slices or shavings, that it may heat quickly and equally; a little butter may be added; some persons add a little ale, and this is not a bad plan. When the cheese is thoroughly melted, and very hot, spread it over the bread rather thickly, and cover well with salt, pepper, and mustard. This seasoning must be laid on boldly, for Welch rabbit is usually eaten as a relish, and to give a zest for the ale or porter which is taken with it. The seasoning is sometimes mixed with the cheese when melting, but this is not an improvement. Welch rabbit is an indigestible article if eaten in excess, but in small quantity it rarely disagrees with the stomach, as the cheese is corrected by the condiments.

The first challenge was finding the cheese. I went to two fancy cheese stores and then two fancy grocery stores, all in a fruitless quest for Double Gloucester cheese. The recipes I looked at were very clear on the types of cheese suitable for Welsh rarebit, specifying Double G or cheddar as a second choice. Some recipes disparaged Single G, which is a cheese I've never run across, in spite of my obsession with cheeses.  I found Cotswold cheese (double G w/ chives and garlic), which I didn't think would work for this recipe, and Huntsman cheese, in which Double G is layer with Stilton. In despair, I opted to buy some 1833 Cheddar. Later that day, I did manage to find Double G in my regular grocery store of all places. 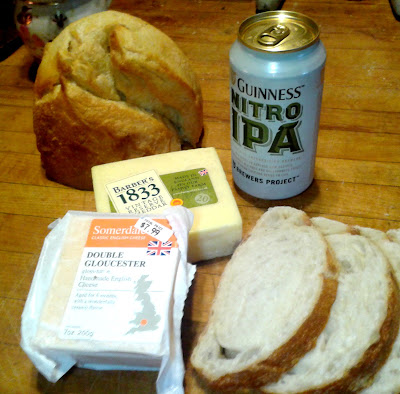 The next challenge was figuring out how to melt the cheese. Several recipes mentioned a cheese toaster, which is a bit like a double boiler with small compartments for melting individual servings of cheese. I discovered that some inns sold upwards of 200 servings of Welsh Rarebits each evening, so these toasters would have been really useful. You can see a variety of toasters here. I don't have one. Although I do have a raclette grill, I opted to just use a saucepan.

Year/Region: 1842/London (although I found Welsh rarebit recipes going back to 1796)

How Did You Make It? I toasted some sourdough bread and chose to leave the crusts on. I then put 1 Tablespoon of butter and 1/4 cup of ale in a saucepan. I kept adding cheese in hopes that the moisture would blend in, but finally gave up at 3/4 lb. Modern recipes for Welsh Rarebit also use raw egg and flour, which might make for a more homogeneous rarebit. I loved that my master recipe specified to slather on the mustard on top of the cheese. Recipes today invariably blend in all the spices, but I followed this suggestion, using Colman's English Mustard since I knew it to be a historic brand. I also liberally sprinkled kosher salt and pepper on top. 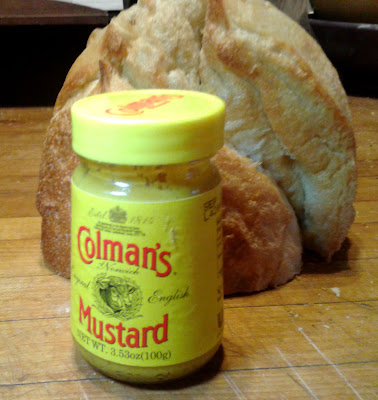 Time to Complete: Less than 15 minutes to slice and toast the bread, shred the cheese, and melt in the saucepan.

Total Cost: The cheese was $8/lb and I used about 3/4 lb. ($6) The butter came to about 13 cents. We were given the loaf of bread and the beer as well. Otherwise, it would have been a pricey dish. As it was, I got a light dinner for two for $6.13. That's actually more than I usually spend on dinner.

How Successful Was It? Moderately. I had trouble getting the cheese to incorporate into the butter and ale. I ended up with a wad of gooey cheese at the bottom of the pot along with quite a bit of liquid. That said, the liquid was amazing tasting, and I soaked some toast in it for awhile. 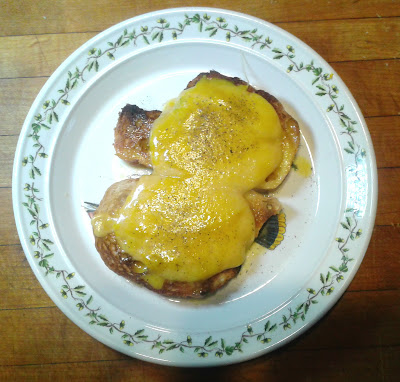 How Accurate Was It? Pretty accurate, I'd say. I didn't have a cheese toaster (although that's not the only way rarebits were cooked). Choosing to spread the mustard on top was a great suggestion. I loved the way it didn't quite blend in with the cheese, so I got a blast of really strong mustard with each bite. I'm pretty sure I'll eat it that way from now on.
Posted by 7-letter Deborah, never a Deb at 2:16 PM

Mmm toasted cheese. I considered a Welsh Rarebit too -- just cause I haven't ever made it, although I know I'll love it.

Mmm. It looks so tasty.

Mmm.. Melted cheese on toast. What's not to like! I've tried Welsh Rabbit before, from a different recipe (which mixed all the seasonings into the cheese) and I didn't like it; it was way too salty, for one thing. However, the leftover cheese mixture, when cooled, became much like the spreadable cheese (port-flavored, smoky cheddar, etc.) that you can still buy in refrigerated deli cases in regular supermarkets. I love that stuff on toast, or on crackers, or really fresh bread, so I think I'll have to try your recipe and see if it works the same way.

Oh my gosh, that sounds yummy! Double Gloucester with and without Stilton are staple cheeses in our house. I have always skimmed over recipes for Welsh Rarebit thinking that it was something completely different. Now that I know it's cheese on toast, I'm going to have to make this. Thanks for sharing!