The Challenge: It's sugar, and maybe spice, and definitely everything nice. Test out a historic recipe for sweets, sweetmeats and candies--but don't let them spoil your appetite!

I've actually done a lot of research on commercial candy making in the eighteenth and nineteenth centuries, but haven't ventured to make much. It's still relatively easy to purchase historical candies if you know what you're looking for. I chose to make "Chocolate Puffs" from Mrs. Mary Eales's Receipts for Confectionery, which was first published in 1718. 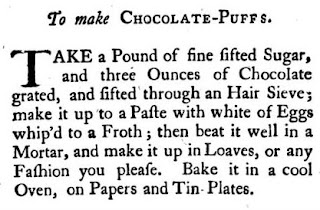 At first glance, the recipe seemed like a straightforward meringue. But as is often the case, key information was missing, namely the number of egg whites, as well as bake time and temperature. I also wasn't quite sure of the consistency for "Chocolate grated, and sifted through an Hair Sieve." I decided cocoa powder would work. Perhaps I should have done this as my "History Detective" entry.

How Did You Make It? First, I decided to halve the recipe, so I got out my digital scale. Eight oz. of sugar came out to exactly 1 cup. The cocoa, 1.5 oz., came to 1/3 cup. I looked at my favorite schaumtortes recipe, which uses 6 eggs, 1.5 cups of sugar, as well as vanilla and cream of tarter. I left the last two out, calculated the ratios and decided I needed about 4 1/2 egg whites. To get that, I used 3 large eggs and 2 medium eggs (our Polish chickens lay eggs that are just above medium in size and I had some grocery store eggs as well for the large ones).

I beat the whites to a foam at high speed in the stand mixer, then slowly added the sugar, one tablespoon at a time until the mixture formed stiff peaks. I then added the cocoa in the same manner, before realizing I really needed to slow down the mixer so the cocoa didn't waft all over the kitchen.

I spooned the mixture into a pastry bag fitted with a round tip. I normally make meringue stars, but decided to follow the recipe's suggestion of making loaves. I just piped a loaf about 4" long, quickly realizing that the cookies were going to look remarkably like poop. 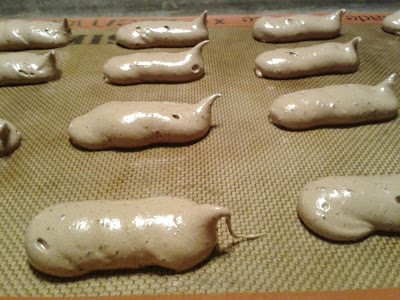 Following my schaumtortes recipe, I baked at 250 degrees for 75 minutes.

Time to Complete: Prep was about 20 minutes. I honestly didn't pay attention to that bit. The part in the oven felt like it took forever only because I couldn't wait to taste them. One hour and 15 minutes of baking time. A further 5 minutes with the oven door ajar to cool.

Total Cost: I had everything to hand, so I can only estimate cost. I guess the cost for 5 eggs would have been about $1, If cocoa sells for about 40 cents/oz., I would have spent 60 cents. Sugar is about 9 cents/oz, so 72 cents for the sugar. Total cost would be $2.32 for 32 meringues.

How Successful Was It? OMG so delicious. I snatched four out of the oven while baking, just for "testing" purposes. After the second, I warned LB that if he wanted any, he had better get on it as I planned to eat them all. I've made chocolate meringues before and these were by far the best. They were both crispy and chewy and wonderfully chocolaty. The only problem was that they looked an awful lot like poop.

If you make these, maybe pipe into a less scatological form. After all, the recipe says "any Fashion you please."

How Accurate Was It? Very accurate, I think. I'm not quite certain that cocoa is the same as grated chocolate run through a hair sieve. I used some modern recipes to calculate how many egg whites I should use. I used a stand mixer and a modern, commercial convection oven. Instead of baking on papers, I used a silpat.
Posted by 7-letter Deborah, never a Deb at 11:29 AM

Totally brilliant and inspiring! Now I want to make Chocolate-Puffs, just so I can serve them to my family and make them wonder!

Great minds think alike! I found a bunch of similar recipes going back to John Nott and Frederick Nutt in the 18th century. Yours came out better than mine did. I used American Heritage Chocolate made by Mars to mimic the type of chocolate in the 18th century. Cocoa powder wasn't invented until the 19th century after the time of the recipe I used.

I've had that American Heritage chocolate. It's delicious! My main reason for opting for cocoa is I just didn't feel like grinding away on the microplane for ever and ever!