When the Yarn Harlot came to St. Louis several years ago, I hadn't gone. I'd been knitting for years at that point, but the world of knit blogs and stitch 'n bitch groups and such was all new to me.

Who would want to knit with a group of people when it was perfectly possible to knit at home? Who were these knitting writers who weren't even designers?

After her last visit, people who had been there told me I knitted like her (apparently we're both armpit tuckers), so I checked out her blog, and have been kicking myself for not going ever since.

She's funny, first, but I'm particularly interested in her output of writing. She never seems to let the fact that she's writing a book act as an excuse for not writing on her blog. I'm fascinated with how she manages to juggle the two.

When I heard Stephanie was coming back to St. Louis to promote her latest book, I knew I wanted to go, but somehow I had the dates mixed up and thought I wouldn't be able to. At the last minute, however, I realized my mix-up and made sure to go and go in plenty of time to grab a second-row seat. 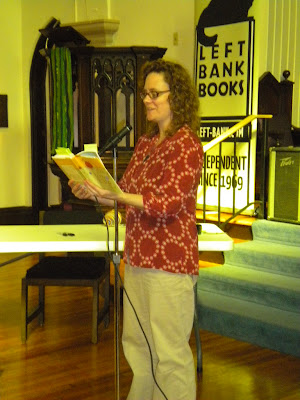 Here's the two of us agreeing that the proper way to spell "Deborah" is, in fact, the seven-letter way. 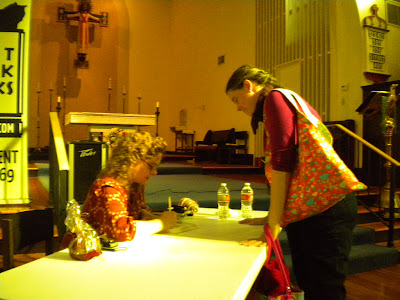 So I went to see a knitting writer and did it with a group of knit bloggers I know personally. I sat next to Kim, and spotted Tina, Cindy, Carrie, Fran, and Kate. There were also non-bloggers like Ava, Siri, and Madeline (Hi Madeline!). I'm glad my knitting life has grown.
Posted by 7-letter Deborah, never a Deb at 10:56 AM

I'm glad your knitting life has grown, too. I've had a lot of fun with you since you discovered blogs and knitting with strangers.