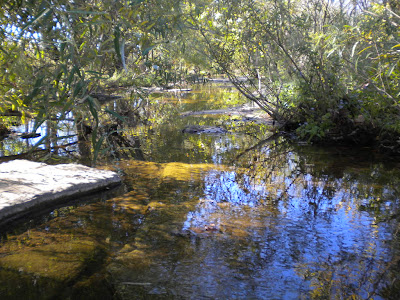 I've been thinking a lot about stuff lately. Not in the vague sense of "stuff" (as in "I hate that stuff!"), not in the verb sense (although I did just have to buy some stuffing for a knitted toy), but in the tangible sense (the stuff in my house, a house stuffed full). I am aware of my stuff, especially when I try to take photographs.

I don't read decorating books and don't subscribe to any decorating magazines, but to me stuff is charming. I like stuff, except when I try to take photographs.

I've never understood people who don't decorate their homes. Not your place, of course. Your place is lovely.

LB and I knew a couple for many years and visited three of their homes, each singularly lacking in even the smallest bit of charm. Everything was tatty and thrown together, and there was nowhere to rest one's eyes and take in beauty. It's like they went to Goodwill and grabbed the ugliest, dingiest example of everything, then threw it all into one house.

It's totally possible to buy great stuff used, but it takes patience and a practiced eye. Notice, also, that I said we "knew" them, not "were friends with." They were drinkers and enablers, shouters, close-talkers, not to mention the series of thong incidents. Not fun people to be around. LB is far kinder than I am, however. Anyway, their place reflected themselves: shoddy, abrasive, chaotic.

There is great beauty in the absence of stuff. I've been following Anna's blog for ages, through at least three homes as well, and she has a spare aesthetic that takes my breath away.

I, however, tend towards the cabinet of curiosities approach. As a teen, my favorite room in the Walter's Art Gallery recreated a private museum, with every inch of wall space covered in art. I like the Venice Cafe, House on the Rock, and Haussner's Restaurant, places not meant to be seen through a tiny viewfinder, but places in which one immerses, gazes about, explores.

Unfortunately, it's almost impossible to photograph such places. The point is to stand in the middle and look around.

So, with that in mind, here are some photographs, funnily enough not taken in my house.

Steuben and I went camping last weekend, and I knew he'd be wet and muddy most of the time. I also knew it would be cold, so I'd taken a down duvet. 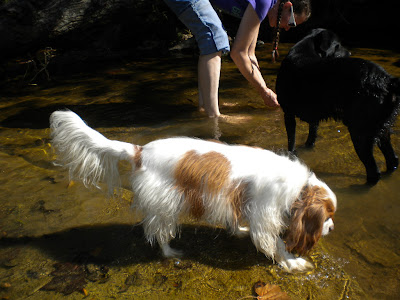 A pale blue, down duvet.*

Fortunately, since I have plenty of stuff, I took an old queen-sized sheet of LB's, folded it, stitched it, and added twill ties to make a duvet cover. 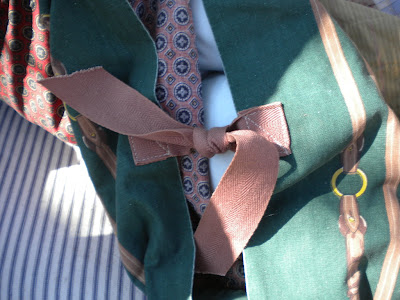 My late cat Double had ripped several holes in the sheet as she got old and had trouble jumping up onto the bed. So I took some fabric scraps and patched the holes. 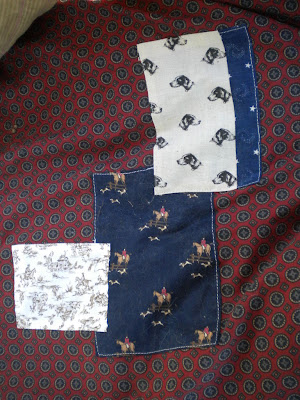 I imagine I'll keep adding patches as Steuben adds his own share of tears. Since it was cold (we woke to frost), he would pick up the duvet cover with his teeth, then kick at it until he'd made a perfect nest for himself.

When I got home, in fact, I added two more patches, which I could easily do ... because we have stuff. 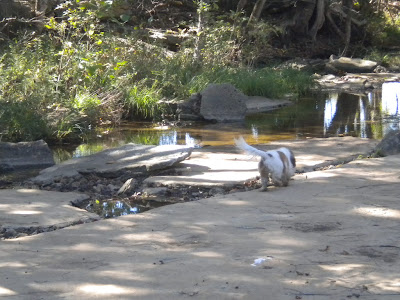 ______________
*Grammar tip of the day: Confused about when to put a comma in a series of adjectives? Technically, you need to distinguish between cumulative and coordinate adjectives. Cumulative adjectives add to one another: "pale" modifies "blue." "Pale blue down duvet" would mean that the down was blue. Coordinate adjectives each modify the noun: "blue duvet" and "down duvet." Basically, if you can put an "and" between the adjectives, stick in a comma: "the duvet is blue and down." Now you know stuff!
Posted by 7-letter Deborah, never a Deb at 12:11 PM

I love the Walters Chamber of Arts and Wonders! You have to go into it with the right mindset. These were objects of wonder to a world very different from today.
Must be why I love walking on the beach collecting shells. Each one is a beautiful.

Wow, I love this post! The whole thing -- the descriptions, the little grammar lesson (one of my favorite aspects of your blog) and the photos. Just great. Thanks.