When I was in Virginia a few years ago, I went on a quest for souvenir yarn. The LYSO had clearly been cornered by a Universal yarn rep and had almost nothing in the store not made by Universal or from one of their minor lines.

I spotted some Rozetti Polaris, a self-striping, single-ply yarn with a sequin thread running through it. A lovely scarf hung on the wall, but it took three skeins. When buying my souvenir yarn, I tend to buy only one.

So, I bought my one, then held onto it for awhile, trying without much success to figure out an appropriately glamorous one-skein project. The next time I was in Virginia, I went back to the store for more yarn, but at this point, the LYSO had clearly succumbed to the power of the Plymouth rep. She was out of the Polaris, natch. Not her fault.

I really did have to come up with something for the one skein. I considered striping it with some Cricket, another DK-weight, single-ply yarn I had rattling around in my stash.

Finally, on Sunday night, I cast on a scarf using the old shale pattern.* I figured I would do the ends in big bands of the Polaris, then stripe with the Cricket in the middle.

Before I got even six repeats in, I knew I didn't want a scarf, so I switched to a cowl and the yarn is much, much happier. I don't even need to use the Cricket after all. 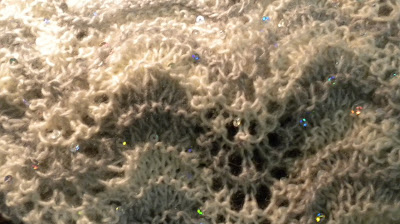 It's just lovely as is.
_______________
*This very old pattern shows up in nineteenth-century coverlets and even miser's purses. Some people call this pattern "feather and fan." Apparently there are significant differences between "feather and fan" and "old shale." Believe it or not, I have no emotional investment in the distinction. Shocking, I know.
Posted by 7-letter Deborah, never a Deb at 12:52 PM

What's the difference b/t old shale and feather and fan?