We have a joint birthday party to attend this weekend and wanted to come up with some nice gifts. Don't worry, the recipients don't read this blog (I think). One guy is an attorney and the other is a union rigger who travels the country doing concerts and such. Seriously, what could I get with no budget?

Fortunately, I've been diligent about keeping my craft room tidy. I've so much more to do, but I've been deaccessioning, completing, and most importantly, tidying up afterwards.

Both friends are fiddlers, which is how I know them, so I decided to make what I now know are called "fiddle blankets." Fiddle blankets sit in the fiddle case between the fiddle and bow and protect one from the other.

First, I got on facebook to see what kind of cases these two guys had. Fortunately, both use the same modern, single-fiddle case. Next, I went to the violin shop where I used to work, took some measurements (8.25" by 23.5" for the record), and asked some questions about fabrics and drape.

My old boss dug through a box in the back and popped out with these beauties: 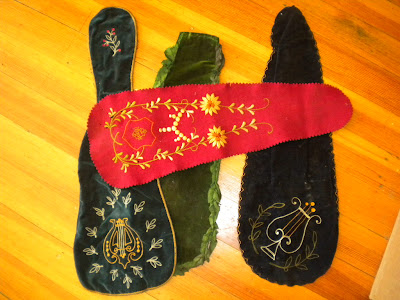 There's tambour work, silk crewel, wool, velvets, silk ribbons, pinked scallops, cording, machine quilting, and just more gorgeousness than I could believe. Old cases were shaped (and often made by coffin makers btw), but I didn't have to worry about that.

For the backing, I chose some burgundy silk and a vintage poly lining. The bias tape I had from a vintage apron project I planned about 8 years ago and never executed. I probably shouldn't have used the yellow, but I did, and I've made my peace with it. Ideally, the fabric closest to the fiddle should be relatively slick so as not to scratch the varnish or leave lint. 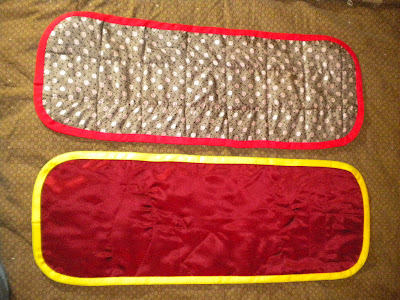 For the top of one blanket, I dug into my stash of quilting cottons and made 3" blocks. I've collected quite a few music and dance fabrics. I also needed more blocks to harmonize (I so didn't intend that pun) with the chocolate and raspberry on the back. That color combination, it turns out, was popular in the nineteenth century, so I supplemented with a variety of reproduction cottons. 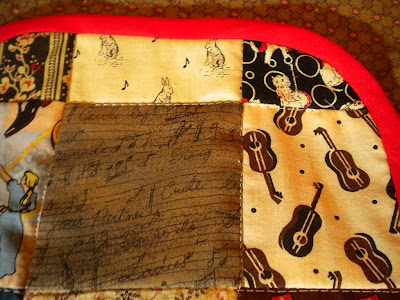 For the other blanket--and this was a fairly emotionally wrenching choice--I cut a panel from a vintage skirt I'd bought on ebay ages ago. I'd never worn the skirt as it was teen-sized with about a 22" waist, and I had even gone so far as to take out the side seam and waistband years ago.

I went back and forth about cutting into it just to give it away, but my friend Willie had stopped by for a visit. Willie is, to put it mildly, a minimalist--as in live-on-the-beach-in-Baja minimalist. The combination of him lounging nearby while I worked, the pleasure of crafting in a tidy craft room, Steu laving Willie's feet, and one of surely the last warm breezes of the year coming in through the open window, came over me. I cut that fabric. 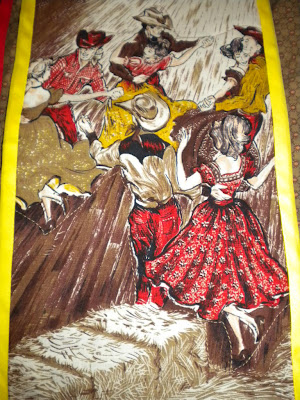 Here they are together. I hope my friends like them. I figure at the very worst, they can use them for a table runner or wall hanging. 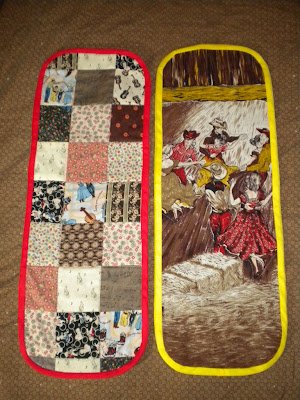 A few other quick pics just to get them over with:

For LB's birthday last month, he asked for a chocolate bombe. I made two as I owed a favor to another friend. There's nearly two pounds of chocolate in each. Inside, there's white chocolate mousse, chocolate mousse, a layer of pecan cake, and the outside is covered in chocolate ganache and chocolate curls. 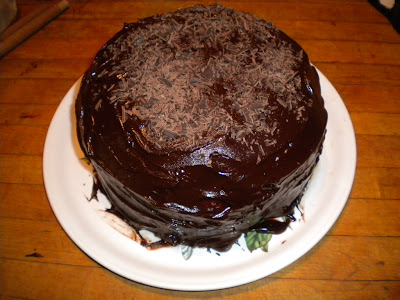 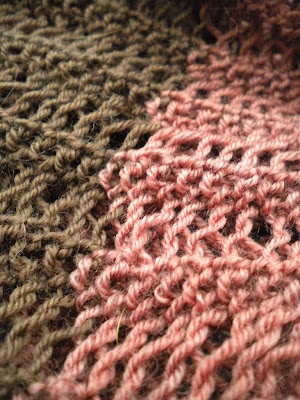 More on that another time.

ps: I forgot to mention that for the batting of the fiddle blankets, I used some wool flannel I had in my stash. Total cost of projects (not factoring in that at one point I did actually spend money on all this stuff): $0.00!
Posted by 7-letter Deborah, never a Deb at 10:21 AM

Awesome! I love the stuff you make.