Fairly regularly, I'll get a shockingly well-written, dynamic essay from an otherwise completely inarticulate student, often even a developmental writer. Normally, I'd suspect plagiarism, but if the subject is sports, I know the real story.

This student has been pouring over sports magazines for years; sports writing is literally the only thing he ever reads. While I will tell him (and it's always a him) to stop using the present tense in narratives, I let him write as many sports essays as he wants. I always smile when I hear the voice of a sports writer come out of a gawky teen.

Remembered event? A big game.
Profile? A coach.
Compare and contrast? Two athletes.
Explain a concept? Icing the puck, in-field fly rule, touch back, or any other esoterica.
Evaluation? A restaurant review of a sports bar.
Proposing a solution? Negotiate an end to a league strike.

I'll spare you my own sports writing about the details of the Cardinal's 2011 season and just mention that I love the game of baseball. I carry a schedule in my wallet, watch the home team every time they're on network television, and listen on AM radio when they're not (which happens more and more as MLB tries to control the entire revenue stream). Last Thursday, Game 2, the students in my night class tried to convince me to cancel class so they could watch the game. I said, “Unless you listened to the NLCS on AM radio, you do not love this game more than I do.”

On Sunday, Ann invited me to attend Game 6 of the World Series. Never ever in my entire life did I imagine myself at a World Series game. Then on game day, the commissioner postponed the game, to the same night as my Thursday night class. I tried not to feel heartbroken; after all, I’d never dreamed of going to the game anyway. Plus, I knew the Cards would benefit from the extra day’s rest. I was willing to take one for the team.

I tried to make my peace with it. I tried really hard. Fortunately, everyone else convinced me to get a substitute for my class (it was a film night anyway) and go to the game. My department chair, a Cubs fan, even offered to substitute.

Even on the way in, I couldn't quite believe I was going. When Ann handed me my ticket, I was convinced someone would sprint out of the crowd, rip it out of my hands, and take my place inside. When I handed it to the checker, I was convinced that the scanner would trigger some kind of you-do-not-belong-here gate, complete with siren and flashing lights. 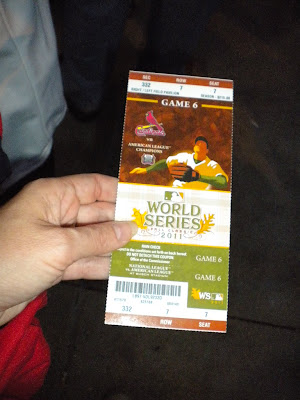 We had amazing seats, although technically any seat inside the stadium for a World Series game is an amazing seat. 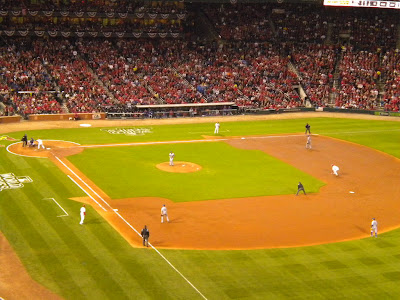 The only time I go to ball games is for Stitch n Pitch, where one can knit. This time, the cold weather meant we could crank out the knitwear. My red and white knitted socks were dirty from the rain-delayed day, but I could wear my red kerchief, and fingerless gloves, and a red boucle sweater underneath my jacket. Thank heavens, because temperatures were in the 40s. 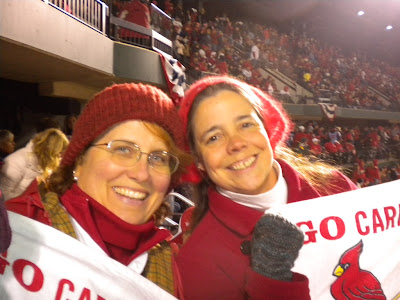 Again, I will spare you the sports writing and just say that it really was a game for the history books. I will never forget it as long as I live. It was definitely, aside from my wedding day, the most exciting day of my life.

Thank you, Ann, from the bottom of my heart. 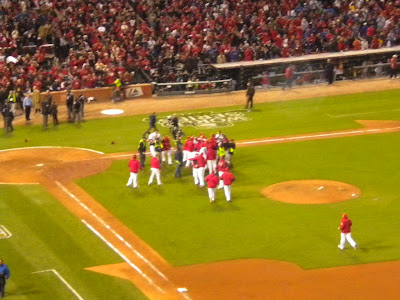 I thought about posting this yesterday, lest my Game 6 euphoria didn't hold over into Game 7, but (just in case you weren't paying attention) the Cards won the World Series.

I, too, had a ticket for Game 6. Instead of going, though, I opted to give it to someone who has never been to a World Series game. I headed to the farm instead. But "farm" no longer means no satellite TV (yea!), so I was glued to the game. It's nice to hear of someone else who knits AND loves, loves, loves baseball. Glad you got to be there.

First I am atheist when it comes to sports, but I respect everyones right to go to whatever their church or sport of choice is. That said, I as so glad you and Ann got to go and have such an exciting evening. The photos are heart and knit warming. You two are awesome knitters and awesome Cardinal fans.

It was a blast, wasn't it? So glad I shared it with you,friend!