The trouble is, when I am passionate about something, I tend to do a lot of research about it. I know about it in depth. If most people tried to send me a Civil War-themed package, I probably wouldn't be able to use 90% of it. Most of what's available at a typical Civil War reenactment is crap, frankly, with almost no relation to historic artifacts.

Plus, when I am passionate about something, I tend to collect obsessively. I already own a lot of stuff.

As far as sending out, some people said their favorite periods were an Egyptian dynasty, or ancient Japan, or who knows what. I wouldn't mind learning about those eras, but the thought of constructing a competent package freaked me out.

I'm glad I didn't drop out and hope my partner likes her package (more on that when it arrives).

In the meantime, my incoming swap arrived.

My partner chose Tudor England, which I actually haven't studied overmuch. My literary interests were medieval, then skipped to Shakespeare's era (just after Henry VIII), then settled firmly on the Victorians. 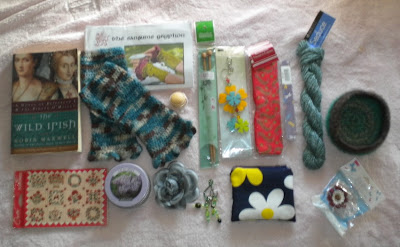 ScrapingD included some crocheted mitts (which I am artfully modeling while trying to avoid showing my dirty fingernails) as well as a pattern to make some rose-themed mitts. 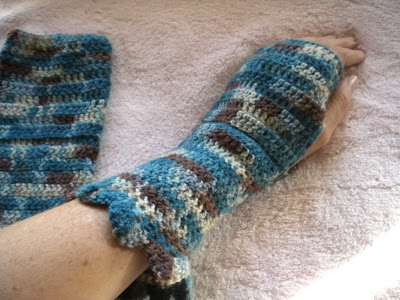 For knitting, she included some bamboo needles, a floral scissors fob, a variety of cases for needles and notions, and some stitch markers. A skein of Berroco Seduce paid tribute to Henry VII and his wicked ways. There was also a felted yarn bowl designed to sit next to my chair and hold my working yarn. 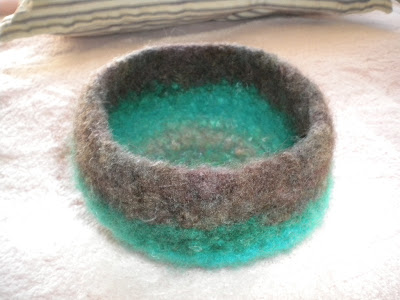 For pampering, I got a nail file, a lavender candle, a silken rose hair clip, and rose lip gloss.

There were some Christmas postcards of 1840s Baltimore Album quilts, which I have long loved and collected images of.

The cutest thing was this little thumb pin-cushion (again, notice the nail-free hand modeling!) made from a bottle cap and some bias tape. I might have to figure out how to make some of these. 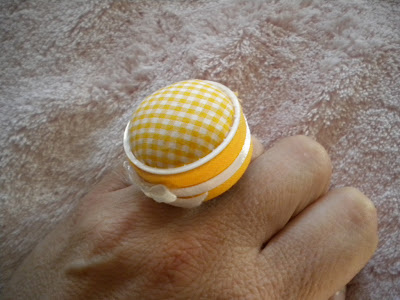 Finally, a copy of The Wild Irish, a novel about Queen Elizabeth and a pirate, which sounds like a hoot. Earlier this semester, I showed Shakespeare in Love, which has a long-running gag about Romeo and Ethel the Pirate's Daughter. Plus, we just finished reading Acts III & IV of Hamlet, with that most ridiculous literary device: pirates, who rescue Hamlet and return him to Denmark.
Posted by 7-letter Deborah, never a Deb at 6:52 PM