Last post, I mentioned that I'd committed a cardinal sin of craft shows: copying a project. I also committed the cardinal sin of a comma splice, but I'd labored so hard to get all the photos up (blogger's been wonky of late) and properly spaced, that I didn't dare fix it.

I saw a beautiful lariat by Sparrow Studios. If you want one, you should buy it from her etsy shop

I have jars and jars of vintage buttons, so I was intrigued by finding a way to use up some of the more unusual ones. I had made several bracelets and some chokers, but was inspired by this design. 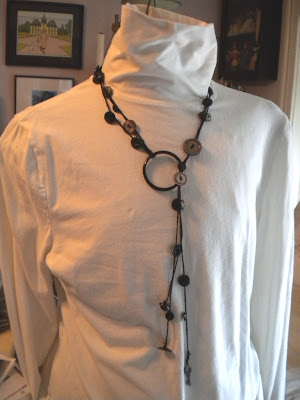 The hard part, as it turns out, will be to find the lariat ring. I visited two different bead stores and found exactly one ring at one store. Such rings, it seems, appear mostly at bead shows. 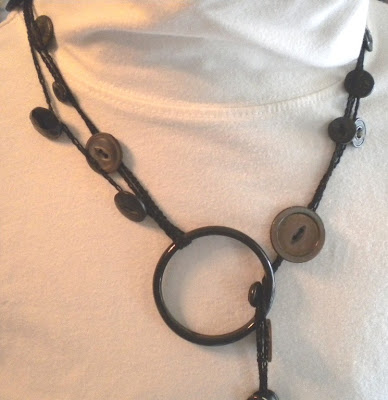 Fortunately, the one I found was black and I have oodles of black glass and metal buttons, as well as some grey shell ones, most of them singletons. Perfect for this project. 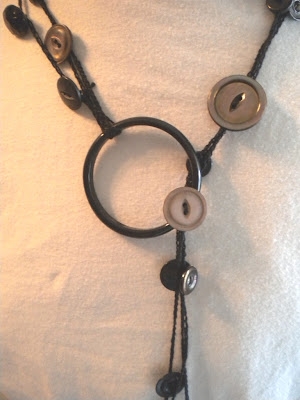 I'm liking it, I must say. I'd definitely modify it next time (and don't worry; I'd never make one of these to sell). 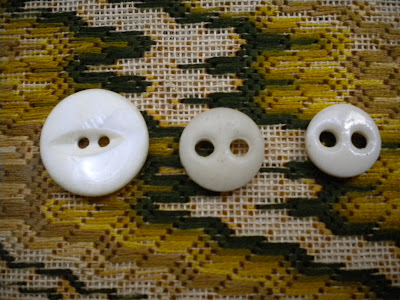 Many of the two-hole buttons you find were used for undergarments, specifically for drawers. The decorative shell button on the left is not (shell tends to break when put under strain), but the two buttons on the right are certainly drawer buttons. The shiny one is glass and the matte one is china.

I'll definitely be making another lariat as soon as I find the right shell ring, but don't think I can bring myself to wear underpants buttons around my neck. Or maybe I can, and it will just be our little secret.
Posted by 7-letter Deborah, never a Deb at 12:28 PM

Interesting about the buttons. And you'll probably be able to find a shell belt buckle before you find a shell ring, but maybe that could work.