In which our heroine gets snowed in ...

My access to a computer took a six-day hiatus during Snowpocolypse 2011, which shut down both school and my LYS. In a desperate attempt to get a paid article published, I even had to knock on a neighbor's door to upload a photo.
I made use of the time by making two dog coats, watching a few Oscar nominees (The Illusionist, Toy Story 3, The Kids Are All Right, and Wolf Man), going to a house concert, and cooking. 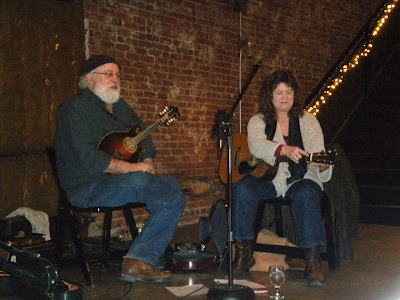 Our friends, Jim and Kim Lansford, gave a house concert at Sqwires annex. While technically not a house concert, since it wasn't actually in a house, it had a lovely, intimate feel.
And, since it was in a restaurant and not technically at a house concert, we could order from the Sqwires menu. The first time we went several years ago, Sqwires frankly sucked. This time, the food was great. We ordered the sampler platter which had caramelized dates on a skewer. I may never recover from how good they were. It would be so easy to make this at home. 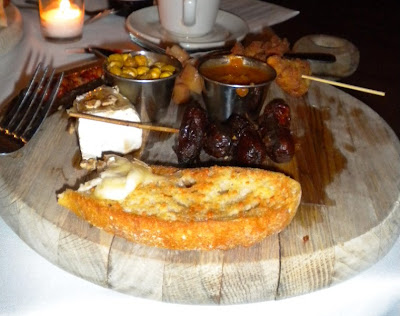 The crostini was delicious with tons of flavor and not too too crispy. The tomato relish was clearly homemade, and I enjoyed the flavors of summer in the middle of a snowy winter. The platter also included sausages, fried artichokes, and brie. The fried chickpeas were the only thing I wasn't crazy about--just meh--needed salt or spice or something.

We also split a chocolate ravioli for dessert. You'll have to take my word that it was a work of art. 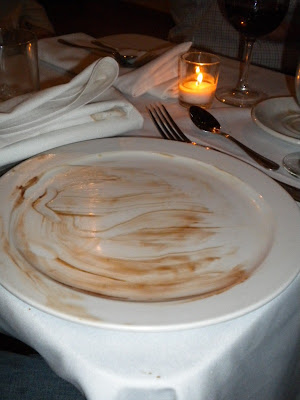 I helped LB turn his baseball cap around backwards so that it wouldn't get in his way when he licked the plate. One of the benefits of a house concert is that you are only among friends, and true friends don't care if you lick the plate.

LB also wanted me to take a photo of the spoon bread. I don't know why. 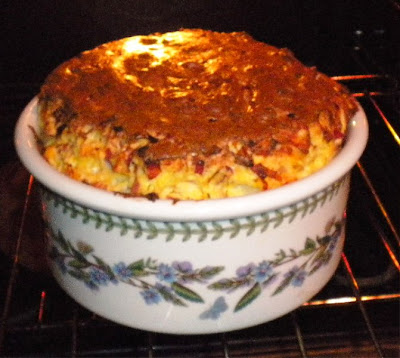 Perhaps he wanted a picture because that is a thing of beauty. The last (and only) time I made spoon bread it came out flat, white and not unlike a pancake.

You are making me hungry here.