This weekend I had to be a rock star up in Goshen, Indiana, which is a pretty dang long way away.
The plan was to drive up to Champaign-Urbana on Friday, stop over to hear the band I'd be working with on Saturday, and then caravan with them to West Lafayette, Indiana after the dance ended at 11 p.m.
Saturday, we would explore Lafayette before driving another 3.5 hours to Goshen. After that dance ended at 11 p.m., we'd drive another hour to Lakeville, Indiana so the band could play fiddle tunes into the wee hours and so that I could sleep.
Sunday I would drive 6.5 hours home.
Dang, that's a lot of driving.
I took Steu to keep me company and work on his road trip skills. He did much, much better than I expected. Apparently a lot of his puppy squirreliness comes from me moving around too much at home. Put me in a car next to him for hour after hour and he looks like this: 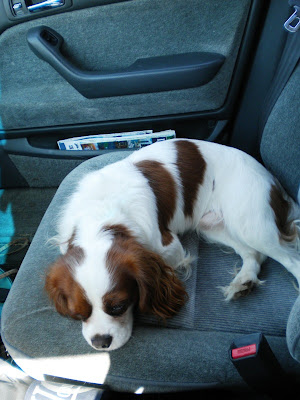 Occasionally he'll wake up and look at me like this (it may be hard to tell, but that's a happy "I'm soooooo in love with you" look and not a sad look): 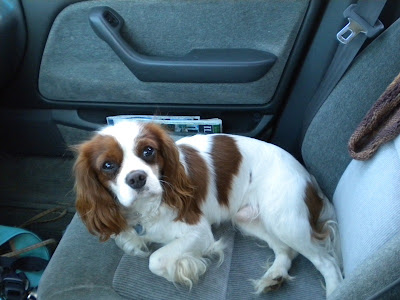 I visited River Knits Fine Yarns in cute, downtown Lafayette. They managed to cram a lot into a fairly narrow store front, and I got to fondle a few yarns I'd not seen in person before. I did get to buy some souvenir yarn, although it's not terribly interesting to anyone but me: 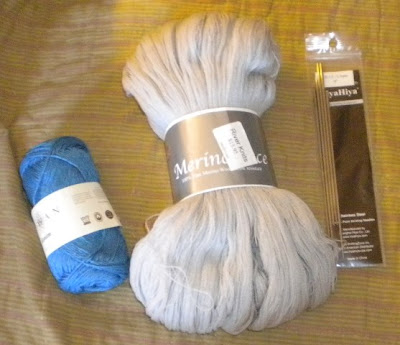 For some time, I have been needing grey, lace-weight yarn for a Civil War hood I've been wanting to try. The Rowan Denim was a bit of an impulse purchase, so I need to see what I can make with one skein. I'd like to do a washcloth with a picture on it (like these) but am not sure about how the Denim's incredible shrinkage would affect the image. The Hiya Hiya needles are a 1.5 size. I've been wanting to try them and needed that size for some socks for LB.
The store is organized almost completely by weight, meaning all the lace weights are together, then all the fingering weights, all the DKs, etc.

That evening up in Goshen, I discovered they had a LYS too, but it was already closed. I'm already trying to re-book myself for another rock star gig, just so I can visit the shop because it looked so fabulous from the outside.
On the trip back, I stopped by Funk's Grove, hoping for some maple creme, but alas, they were closed for Easter. The sap collecting is progressing nicely, nonetheless. 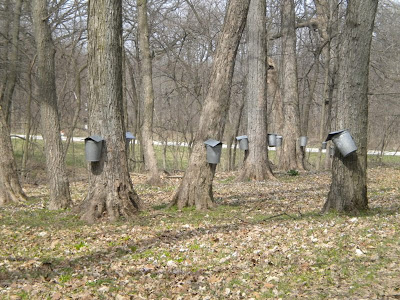