The Woman in White

Having finally finished The Woman in White, all for a book group I do not belong to and which met to discuss it over a month ago in a different state, I feel compelled to share my knitterly thoughts. You needn't feel compelled to read.

Unlike Mary Barton, there's not much needlework in Wilkie Collins' The Woman in White. Still, Collins bestows on almost every female character a brief mention of her handiwork. In each case, the needlework (or as we'll see, the lack thereof) says something significant about the female character or the lot of women in general.

Mrs. Vesey epitomizes the lot of many Victorian women. She's clearly a widow (Mrs.) and has had to make a meager living as a governess to a wealthy family. With the marriage of her only charge, the aged Mrs. Vesey becomes essentially homeless. This knitted Shetland shawl represents a great outlay of time, but of very little money. It's her final gift to Laura.

One of the most odious female characters, I'm sorry to say, is also represented by her knitting, Mrs. Catherick:

That woolen mat for the Bible and the unused knitting-basket in the ticky-tacky parlor represent the surface symbols of productive, respectable Victorian womanhood. Mrs. Catherick is all about appearances, from her handiwork to her dress to her home. She's had a dissolute past (check out her physiognomy) and is determined to be respectable if only out of sheer spite.

Mrs. Fosco only does handiwork for her husband, the evil Count Fosco:

The passive Laura carries with her some kind of vague "work" but her dynamic sister Marian epitomizes the "New Woman" of the mid-nineteenth century:

Later, Laura and Marian are able to stay disguised and supplement Walter's income by "taking in a little needlework."

In many ways, Marian strikes me as a sort of Jane Morris with a bit more gumption. First a photograph of Jane Morris (not one of her idealized portraits by Rossetti): 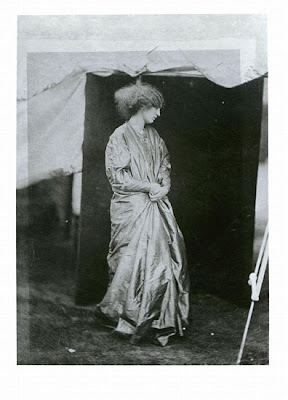 I chose this particular photo because Jane was known for being an advocate of reform dress, in other words, of not wearing a corset. You can see a better view (albeit corseted) of Jane here.

Now read the description of Marian:

"I looked from the table to the window farthest from me, and saw a lady standing at it, with her back turned towards me. The instant my eyes rested on her, I was struck by the rare beauty of her form, and by the unaffected grace of her attitude. Her figure was tall, yet not too tall; comely and well-developed, yet not fat; her head set on her shoulders with an easy, pliant firmness; her waist, perfection in the eyes of a man, for it occupied its natural place, it filled out its natural circle, it was visibly and delightfully undeformed by stays. She had not heard my entrance into the room; and I allowed myself the luxury of admiring her for a few moments, before I moved one of the chairs near me, as the least embarrassing means of attracting her attention. She turned towards me immediately. The easy elegance of every
movement of her limbs and body as soon as she began to advance from the far end of the room, set me in a flutter of expectation to see her face clearly. She left the window--and I said to myself, The lady is dark. She moved forward a few steps--and I said to myself, The lady is young. She approached nearer--and I said to myself (with a sense of surprise which words fail me to express), The lady is ugly!

Never was the old conventional maxim, that Nature cannot err, more flatly contradicted--never was the fair promise of a lovely figure more strangely and startlingly belied by the face and head that crowned it. The lady's complexion was almost swarthy, and the dark down on her upper lip was almost a moustache. She had a large, firm, masculine mouth and jaw; prominent, piercing, resolute brown eyes; and thick, coal-black hair, growing unusually low down on her forehead. Her expression--bright, frank, and intelligent--appeared, while she was silent, to be altogether wanting in those feminine attractions of gentleness and pliability, without which the beauty of
the handsomest woman alive is beauty incomplete. To see such a face as this set on shoulders that a sculptor would have longed to model--to be charmed by the modest graces of action through which the symmetrical limbs betrayed their beauty when they moved, and then to be almost repelled by the masculine form and masculine look of the features in which the perfectly shaped figure ended--was to feel a sensation oddly akin to the helpless discomfort familiar to us all in sleep, when we recognise yet cannot reconcile the anomalies and contradictions of a dream.

"Mr. Hartright?" said the lady interrogatively, her dark face lighting up with a smile, and softening and growing womanly the moment she began to speak."

Everything, from her hair to her dress, even to her moustache, reminds me of Jane Morris, who was all the rage as a model the year that Collins was working on his book.

And, since it's book club and not some academic paper, I can be somewhat random and just stop abruptly on that note.

... although I'd be happy to talk about the sex bits if asked.

Edited to add: PS: If you are the idiot who found this page by googling "Woman in White Term Papers"---shame on you!

Fantastic Deborah! Thanks for the handwork insights. How did you like the book in all? We skipped the Trollope this month. Now we are on Alcott's "Work".

Ooh, I *love* WIW, but I had forgotten about all that knitting and whatnot. Time for a re-read!

I've read the book before and enjoy it, although the last bit where all the ends get tied up is a bit of a slog. I find Collin's views of women really refreshing for his time and the whole thing is a good mystery. I actually found it pretty explicit for its time period too.

What a wonderful, full-bodied blog post!!! I love Wilkie Collins, though I've only read bits of The Moonstone. Time to fix that. He has lovely descriptive powers. I want some glutinous upholstery!

Thanks, Deborah! What a wonderful blog entry. I never made the connection between Jane Morris and Marian, but I'm sure you're exactly right. There are so many images in W in W that remind me of Pre-Raphaelite paintings. Now I want to reread the book with all these new ideas in mind.