I've set myself up for the next few weeks of blogposts with a tidy little backlog of photos. 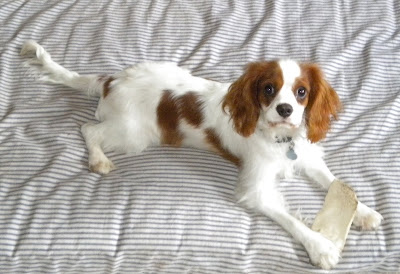 Second, the LaLa Scarf from Greetings from Knit Cafe. 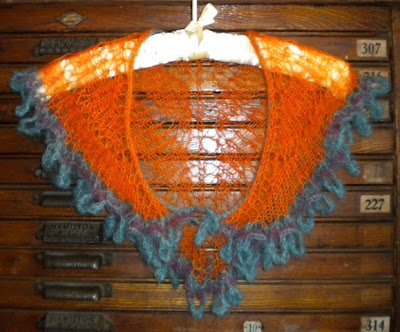 It's a quick little knit, the bulk doable in a evening, with the picot edge done the next. It went so quickly I made two. Suzanne, who helped me pick out the colors, received the second and calls it her "fairy wings." I loved the orange, but didn't want the end result to look too halloweeny, which ruled out adding purples or greens, colors I'm particularly fond of. I love the finished combo of the slate blue, deep burgundy, and bright-bright orange.
This summer, my Indian students loved it too, even stayed after class to tell me so.
The finished scarf is only slightly larger than a bandanna size. I've been wearing it with just a tiny knot at the tip (as in the photo above), so the scarf follows a deep v-neck. Now that I look at the Rav projects, I remember that I was initially drawn to it worn close around the neck. 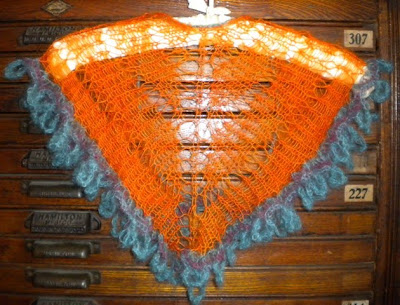 I had spotted the book, Greetings from Knit Cafe, in the past and kind of blew it off. I had seen a lot of name-dropping, look-at-how-glamorous-knitting-in-Hollywood-is books and this one in particular didn't impress me. The projects were really basic ("Let's pretend we're designers and add a few stripes to a basic knee sock pattern"), and the felted saddle blanket (yep, for an actual horse) made from fourteen balls of Kureyon kind of pissed me off. 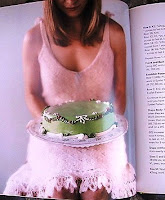 Thanks to Ravelry, I gave the book a second glance when I was trying to find a pattern for the Haiku. There's some cute stuff in there after all. Part of what I liked on second glance were the yarn choices: Rowan Denim, Blue Sky Alpaca Silk.

That said, get the book from the library. Greetings from Knit Cafe is worth the cost of overdue fines, but not necessarily $25.

Ok, I can hear you saying these things. I mean, your voice is very clear here. And you make me laugh.

Steuey is so freakin' cute!

Mohair slip dress...I'm itchy scratchy just thinking about it! And definitely, cake would be a bad idea. :)