Bridgett has a great post on how she's been dealing with her weekly Fair Share. The cookable greens I can deal with, but the lettuce is kicking my ass. Like Bridgett, I HATE throwing food away.

This week I also had to factor in a brutal teaching schedule and plans to be out of town for three days.

I focused on keeping it simple: no trips to the grocery store, no hour-long preparations, nothing that would require the use of every single burner on the stove* or multiple kitchen timers.

I can't remember accurately everything we got (sausage; eggs; cheese; lettuce; green onions; mushrooms; shoots; croissants; sorghum; strawberries), but most of it is being eaten without much prep. The strawberries were simply sliced and sugared and served with the croissants; the cheese was sliced and eaten; the mushrooms were sauteed with the green onions in some Fair Shares butter and some leftover sour cream; the sorghum was poured on some biscuits; the eggs were hard-boiled.**

It's not my usual style, but it's all I'm capable of right now. At least it's all getting eaten.

We were headed out of town to three Civil War micro-events: a living-history day at the Anderson House (Battle of the Hemp Bales); a luminaria lighting that evening at the incredibly endangered site of the Battle of Lone Jack; and a ceremony at the Confederate Memorial Cemetery in Higginsville.

Much of the food travelled with us to make it easy on our hostess and to serve as a picnic lunch at the Anderson House.

Later though, I knit. At the last minute, I had grabbed my travel standby--the Civil War sleeping cap. I'm practicing knitting backwards on this one, just to make it interesting and to work on my gauge.

We'd been set up next to a spinner and, my god!, the questions and comments she got:
Rachel was sweet, and patient, and serene. Way more than I was with my crabbiness about demonstrating "eating lunch."

Later, I found out that she owned a yarn store in town: Woolgatherings in Lexington, MO. They're too new to have a website, but when the event ended, she arranged to keep the shop open so that we could visit.

Woolgatherings carries a mixture of antiques and yarn, all beautifully displayed. The hoosier cabinet acts to hold yarns, the containers are mostly for sale, the yarn hangs from vintage hooks. It was all just very lovely.

There was a pretty big selection of magazines and notions and the yarn lines included Brown Sheep, Nashua, Blue Ridge Yarns, and Farmhouse Yarns, as well as handspun from Rachel's own flock.

The shop samples were all made by the employees, which isn't always a given at your LYS.

Rachel also showed me photos of her sheep and was able to point to which sheep had donated the yarn for which projects. Even cuter, she had photos of her Jersey calves.

Best of all, I got my souvenir yarn! Behold, Trixie's Loopy Mohair, in the Mardi Gras colorway. 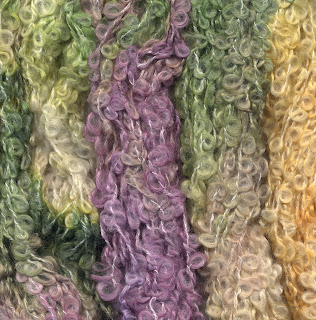 When we finally got back last night, Fair Shares rescued us again. We had an entirely Fair Shares meal: black bean burritos with cheese, salsa, tortillas, and of course, lettuce.
____________
*massive fail on that one. LB came in on Lettuce Soup Night, saw the cake in the oven, frosting in the stand-mixer, the lettuce soup , the creamed mushrooms, and the eggs hard-boiling, and simply asked, "Avoiding grading, are we?"

**sorry about all that passive voice, but I'm not feeling up to changing up. Besides, is the important thing the agency (me doing the cooking) or the food being cooked?
Posted by 7-letter Deborah, never a Deb at 12:43 PM

That Trixie's Loopy Mohair is *gorgeous*. I want to cuddle down into it and take a nap. Or, maybe I just want to take a nap.

(I'm emailing a link to this post to my mom so we can be sure to stop by Woolgatherings - she'll definitely appreciate the antique side of things, too.)

someone thought she was spinning human hair?

Love the description of your "demonstration"