I had promised to talk about my rock-star talk, but now I'm frantically researching and working on the next talk, due tomorrow, on top of a job interview.

So here's the quick and dirty version:

So there you have it. I stand in front of a room full of people every single day, so while I'm inclined to whine, speaking in public doesn't really bother me.

The best part though was that they put me up for two nights in a suite at the Hilton. Normally when I visit this town, my friends kick their kid out of his bed and I end up wedged in next to a pile of boy-smelling stuffed animals. I'm glad to be in a bed instead of the floor, but my god, those beds at the Hilton ... It's true what they say about them.

While I claim to be a rock star, I'm more like the garage band travelling around in a beat-up van, sleeping on someone's floor, and stealing sugar packets from the gas station. I am unaccustomed to luxury: cable TV, a business suite with free color printing, free breakfast, a feather bed, down pillows, a down comforter, high-thread-count sheets, a plush blanket, the most comfortable mattress I've ever slept on. I returned feeling like a new woman.

I also had time to visit two LYS and to junk. The haul was as follows (clockwise from the top): 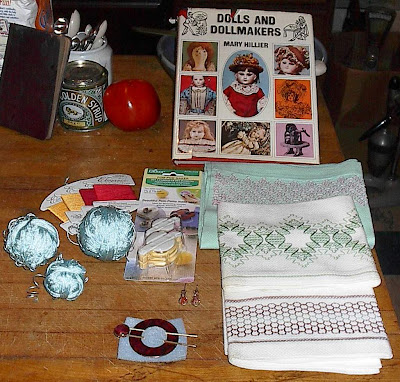 By far the best purchase was this sweet, delicately hand-cut sillhouette of a boy and girl winding yarn. 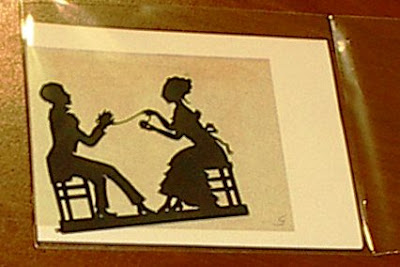 It makes my heart sing.
Posted by 7-letter Deborah, never a Deb at 1:56 PM

What is a huck towel, and why are they so special?

I love that silhouette!