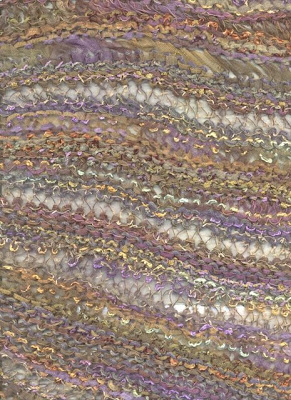 It's done; it's been worn; it's been complemented by relative strangers; it makes me very happy.
I picked five yarns from Prism's Tumbleweed colorway (Tyrol, Tulle, Dover, Azalea, and Loopy), two skeins of Louisa Harding's Castello, two skeins of Habu held together (Kasuri and Paper Moire), and the leftover Fiesta La Boheme from the Mardi Gras Poncho (ravelry link).
A big part of my delight in it is that I put not a whit of this yarn on a credit card--I paid out in cash, $20, $23, $24, one skein at a time over the course of about four months. I haven't put yarn on a credit card in years, which is probably why I rarely make sweaters anymore.
Because I am an obsessive sort with pronounced tendencies towards matchy-matchiness, I quickly realized I needed to write down the names of the eight yarns I used and draw a name at the end of every two rows. I didn't always do what the card told me to knit, but at least I stopped obsessing. 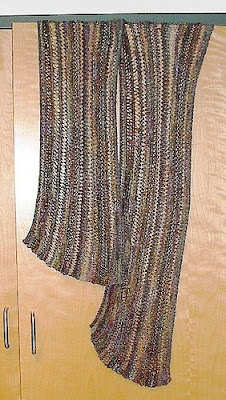 Now that I think I've found all the loose ends and tacked them down with sewing thread, I can wear it with joy.
Posted by 7-letter Deborah, never a Deb at 9:42 AM

Very cool! Would love to see all the colors in person! I am so, so impressed you wove in all those ends.