As in college, I spent my birthday dealing with papers. Such is the lot of an academic with a mid-December birthday. At least none were plagiarized this year. . . yet.

December is a the most brutal time of year for academics. April could be just as bad, but as Rachel pointed out "No one gives April parties." The mix of grading and holiday obligations grinds us down.

The pointy-headed guy with whom I do daily battle for the office computer kept nodding off at his desk, in spite of all my "accidental" banging and clunking. He'd tip forward, his nose pressed against the classified ads, then right himself after each dropped book, only to tip forward again mere seconds later. I had one little mock-melt down yesterday, two short naps, and one real hissy fit. Once again, I neglected to cook dinner. I've already graded 6 papers this morning and have 20 more to go before tomorrow's 7 a.m. final. I am craving carbohydrates like you would not believe.

Other than that, it was a lovely birthday. LB came up with gifts and a card, something that only happens every three or four years. My parents checked my amazon.com wishlist, so I got a book I really wanted. I bought myself a Portmeirion punch bowl. My sister renewed Netflix, the best gift ever.

And Rachel gave me yarn. Yarn she dyed. Dyed in Mardi Gras colors. Dyed just for me.

I love it so much I wore it as a turban for four hours. I wore this turban in the shop, to a restaurant, in the truck on the way home. 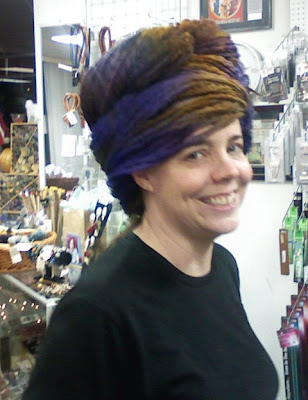 I hung the yarn on the coat rack so that I would see it several times a day and so that it could tell me what it wants to be. I'm aware, of course, that talking to yarn is considered a sign of insanity. I didn't talk to my birthday yarn; I listened. Listening to yarn is important. I listened very hard. 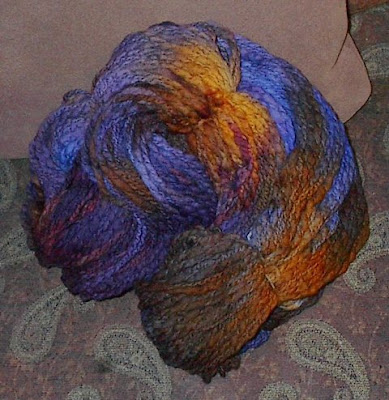 At first, it considered being a scarf, but right away knew it would disappear into the scarfy morass.

Then it called out to be knit into some kind of panel. I had a hard time figuring that one out. A panel? As in a vest? Not enough. Some sort of stripe on a top-down raglan? It didn't seem to want to cooperate with any kind of compatible yarn for the rest of the sweater. A few squares in some sort of mitered project? Perhaps.

This morning it seems to have found its lot in life. It knows and I think I know what it's trying to tell me, but I'll have to wait until after all the grading to give it a shot.
Posted by 7-letter Deborah, never a Deb at 11:25 AM

Happy bday! Love the turban! The yarn is crying out to be a little capelet, I think. Or a wig :)

Happy Birthday, Deborah! Your turban manages to be both regal and witty.

As they would have said in "our" period, many happy returns of the day!

That's a great birthday hat! I think your yarn wants to be a turban. Happy Birthday!

It's possible that I may have a second skein that I was hoarding for myself. I could be persuaded to trade for it...maybe.

Hippo Birdie to you!

Pardon me if I'm the last person to wish you a happy birthday. What better time of year to celebrate a birthday than during the holiday season. As far as that funny yarn wig, perhaps you can sell it to Higginbotham.