For our first Valentine's day, LB bought a pack of children's classroom valentines and hid them all around the apartment. That was in 1994.

For a few years after that, I would get a pound of Bissenger's truffles and 2-3 cards because he never could decide on just one.

The last big blow-out V-day was about 4 or 5 years ago, when he picked out and assembled a gift basket of L'Occitaine products. Knowing him, it took him hours and each choice was an agony of unfulfilled possibilities.

And now we're married and I'm sure I must snore at night. Last year, I got nada. This year I got two outdoor thermometers for Xmas. We just spent $143.00 taking the cat to the vet for leaving bloody pee spots on the linoleum.

I'm not holding out much hope for seeing stars this Valentines day, but generally I think we're doing okay.

His Valentine's socks are done. The photo looks a bit wonky because the very narrow Dutch heel distorts the sock when it's lying flat. 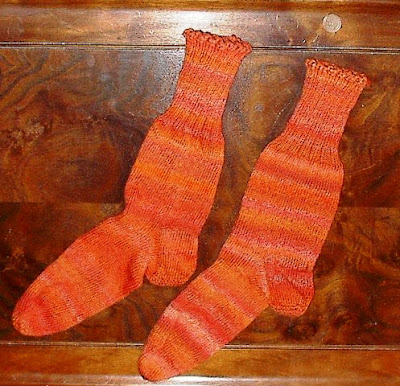 Back in January, I had intended to make LB some Valentine's socks but finished them in about a week. Since he had tried them on already, I couldn't very well hold them back for another month, so I had to make another pair for the legislated holiday on 2/14. They're somewhat of a surprise because, while he saw me knitting orange socks, I never said whom they were for. I just stashed them away when they were done and started something else--Civil War crocheted mitts. 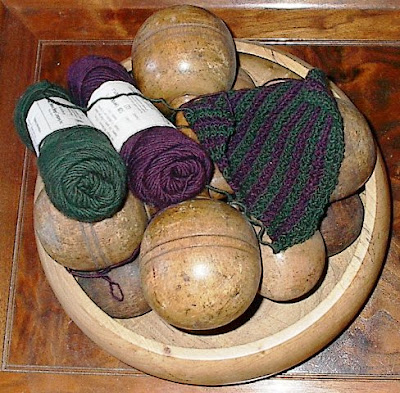 Last night, he asked excitedly if the mitts were for him. Some nerve, I say.
Posted by 7-letter Deborah, never a Deb at 11:02 AM

That is the orange trekking isn't it? I saw it come in and then it was gone. Good use of it I say.