Actually, I've no major update on the square dance deal, sorry. I've met with the lower level producers twice. I've still got to talk price with the big guy, but I hear from the band they're trying to be really cheap. Almost offensively cheap.

I'm biased, of course, but there's not too many people who do what I do and do it well. That's why I'm a rock star. I'll be going with a number that is fair and not out of line with what I get at other places. We'll see what they say.

At the very least, they're definitely going to be renting some costumes from me. I've been collecting these dresses for about 15 years, and it's finally paying off.

Because I have five house guests arriving in less than a week and because the house is completely chaotic and because I'm stressed about this square dance deal, I naturally decided to knit. And naturally, I turned not to something I'd already begun, but launched into a brand new project. 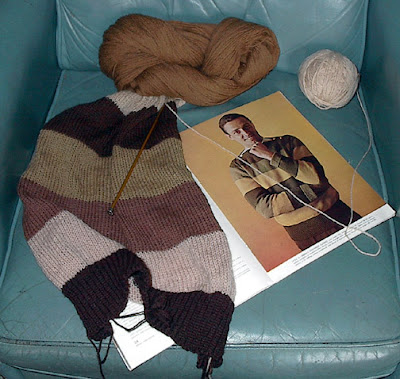 It's made from the afghan yarn I picked up at Goodwill. It's a vintage pattern. I'm pretty happy with it so far. I'm not sure LB will like it though, especially the boatneck. I don't really care though; at the moment it's keeping me from losing my mind.

Deep breaths. Knitting is good. Break a leg on the squaredance deal! ; )