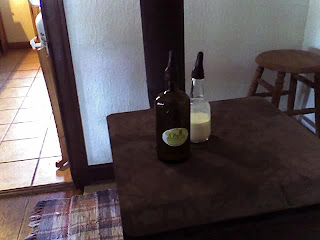 Above all, it turns out that bottle feeding two orphaned lambs every four hours makes none of the above matter in the least.

I get incredibly car sick on those roads even without trying to knit too! We're going on a couple car trips this summer where my hubby will be doing most of the driving. I've already warned him that I want to time any of my "giving him a break from the driving" to be on the non-interstate parts of the trip.

The baby lambs are ADORABLE though! Very, very cute.

The good news is that they are now grazing in the pasture. And that big dog there, Florrie, will be keeping them safe.