I got into a flurry of finishing this week. I know I knit obsessively, but not all day, every day* as some people think. It's just that between Saturday and Wednesday, I finally got around to finishing three items.

First, the Nigerian Lottery project is done. No, there are no pictures. I'm not sure I'm ready for the shame. I have worn it and been complimented, but I'm not feeling it in my heart.

I'm not entirely loving the way the yarn pooled. It's been finished, been admired in the hand, but not yet worn.

The yarn is Noro Daria knitted on 8 stitches in a linen stitch. I picked up the yarn and free pattern in Champaign-Urbana last time I had a gig up there, although I modified a bit to give a twisted slip stitch edge.

I'd seen Daria in the stores and admired it, but I am not a cell phone baggie or crocheted purse kind of a gal. Come to think of it, I'm not really a belt kind of a gal either, but somehow I succumbed.

Basically, it was a quicky knit in a souvenir yarn. From purchase to completion, I've only put 1,742 miles on the truck. That's a very quick knit.

Finally comes the one that brings me great joy: the sunburst sling.

This too was actually mostly done in December. The yarn arrived shortly after Christmas, and I swear the body of the thing was knitted by the end of the year and the strap knitted during the first weeks of '07.

I waited to assemble it until after the February knitting guild meeting because I was hoping for some great insights and advice on linings and fastenings.

The KAL got postponed until mid-March and I just couldn't wait any more. I went ahead and sewed in the gusset, lined it, sewed down some webbing so the strap won't stretch, knitted a bit of i-cord, and added the cutest button on the planet.

It could not have turned out better, and I swear the button isn't this blurry in person.

The whole thing reminds me of those 1970s crocheted throw pillows. It has a delightful poofiness to it, and is cute beyond belief.

It also turns out that the sunburst sling is really good for holding my next knitting project. Begun about 6 pm yesterday and already frogged three times until I found a stripe pattern I liked--the next Civil War sleeping cap. 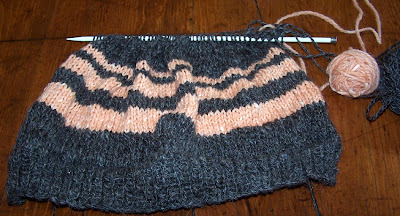 *Because I can be a grammar curmudgeon, I have recently become quite annoyed with the overuse of the phrase "24/7." The latest was on Monday when someone on the radio said, "We've been working on this problem 24/7 since Friday." Here's the real problem, girlfriend. The "7" means "7" as in 7 days a week. You cannot work on something "24/7" for less than a week. So there!
Posted by 7-letter Deborah, never a Deb at 3:11 PM

I love how your sunburst sling bag turned out! I wanted to participate in that, but it just didn't work out for me this time around. Someday I'll actually make it out of my house in time to be there for the KAL part of the meeting.