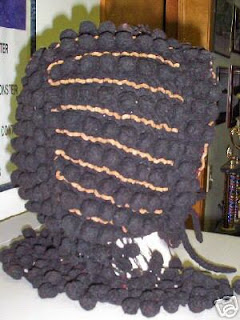 This photo is of a hood currently up on ebay. It's likely post war, but it illustrates a couple of important concepts about nineteenth-century needlework.

First, their concept of beauty is different from ours. If you are truly going to recreate the time period, you want to avoid looking like a twenty-first century woman who has put on some old-timey clothes. Let go of the idea that something is ugly and try to see yourself with nineteenth-century eyes.

Second, they loved ornamenation and adornment and really piled it on. I tend to be a bit spare in my accessorizing and trim and need to work on adding more embelishments.

Third, while we have money (well, some other people might) and not a lot of time, during the nineteenth-century, they had time but not a lot of money. There are clearly well over 200 pom poms on this little number. I am an avowed hater of pom pom making, but even someone who loved making pom poms might draw the line at this project.

Look at it again though. The red chenille lines keep the whole thing from just being a black lumpy mound. The curtain (the bottom drapey bit) is so clever and creative. It balances well with the rest of the hood. The maker clearly put a lot of time and imagination into the whole thing. Her friends likely admired her pom-pom making skills and her effort.

I can't see myself pulling it off, but I definitely would be among her admiring friends. I still might snicker a bit behind her back though because, holy crap, that's a lot of pom poms!
Posted by 7-letter Deborah, never a Deb at 11:24 AM