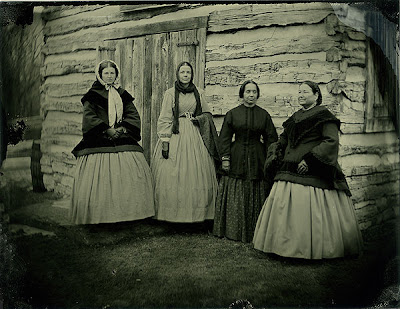 Image courtesy of Bob Szabo
I wasn't much interested in the Civil War as a kid. I grew up around all that stuff: field trips to Gettysburg, family visits to Wilderness, college in Fredericksburg. Yawn. Those relief dioramas with the light-up battle lines bore me to tears, and I'm not much better with books. If you asked me which was first, the Battle of Bull Run or the Battle of Manassas, I couldn't tell you.*
But when I actually put on the clothes and live a bit of the life, I learn so much more than I ever could from a book.
We got roped into a movie shoot for Wide Awake Films this weekend, which was filming some scenes for a DVD on the Battle of Perryville. Had I read any of those history books, I might have learned that the Battle of Perryville took place in the summer, not February. What that means in terms of filming was that we were not to wear any coats. No scarves, gloves, mufflers. Nothing of the sort. In fact, we were cautioned not to breathe much, lest the clouds of our breath in the cold air ruin the illusion.

How did Civil War women keep warm? Well, the sensible ones didn't do outdoor movies shoots in February. When outside, they wore coats, of course, and shawls or sontags underneath the coat. They also had a lot of cool knitwear that they could hide under their voluminous dresses. There were knee warmers, undersleeves, knitted drawers, dickey-type things called chemisettes, and under petticoats.
So here's what I've learned: Flannel drawers, a knitted underpetticoat, and knitted undersleeves will keep you reasonably warm under a thin cotton dress, but basically it can be pretty damn cold out on the prairie on a February afternoon.

*That last bit's a lie, actually. I'll give an e-shout out to whomever is the first non-reenactor, non-sibling to explain why that's a trick question.
Posted by 7-letter Deborah, never a Deb at 11:41 AM

Because the battles in question are one and the same!

Body of water vs. town name, I think.

Am I the first?

I have no idea about the battles - I'm not much of a history buff. I'll have to ask the hubby though, he devours history books like a madman.

Anyway, just stopped by to say hello to my new neighbor on the knitting blogs ring. Your blog is quite interesting, and you're a great writer. I'll be back!

Gold star to Carrie!! Quite a few battles have two names--one Southern and one Northern.