Our friends Andy and Hope got married earlier this year in a wonderful ceremony on the bluffs overlooking the Mississippi River. Everything was just beautiful--low key but full of love.

I used five pairs of jeans. Four came from LB and one (the darkest) from me. I particularly like the hickory stripe jeans border. That particular pair had been ripped down the front of one leg, so I really had to do a lot of piecing, especially on the last strip in order to get enough fabric. Still, I love to see piecing on a quilt--to me, it tells a story.

Here's the story of this quilt:

I went with a long cabin pattern because Hope and Andy bought some rural property in the foothills of the Ozarks and are developing it.

Andy plays the stand-up bass, so I inserted a little scrap of vintage square dance fabric.

He met Hope at a dance, so I put her in too. Hope is prettier though.

Finally, I put a block for the two of them dancing at the center of the log cabin. 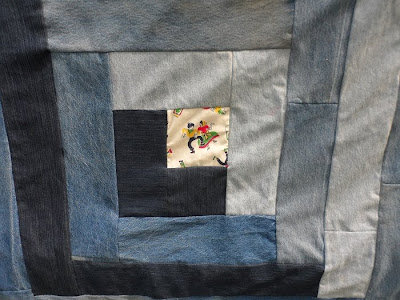 I didn't use any batting because the denim is already fairly heavy. Hope works for an environmental firm, so I knew she wouldn't mind some paint splatters and spots on LB's jeans. I hate the idea of working so hard on a project only to have the recipients decide it's too nice to use. 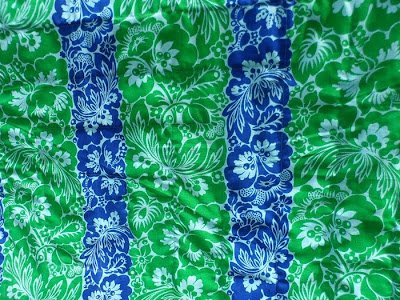 For the backing, I used some vintage blue and green fabric (circa early '60s, I think) a friend gave me. I've got lots and lots of this fabric, so I expect it to show up in future quilts too. 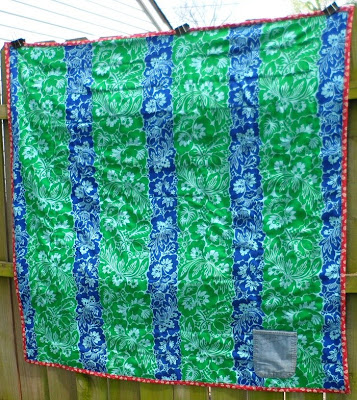 On the back, I signed the quilt by appliqueing on a pocket from the hickory stripe jeans. 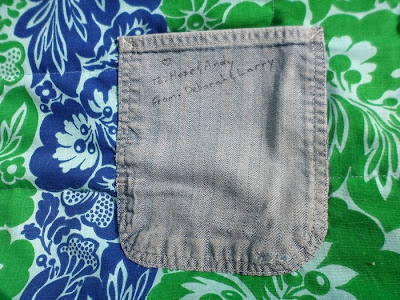 I wish them both much happiness. 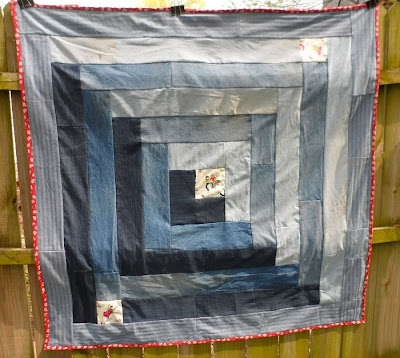 I LOVE this quilt. I have several that I made back in college. Such a perfect weight, cool to the touch, warm after time, solid, and like you said, not something you worry about for a picnic or camping trip or baby in the yard. Love them.