I had a long meeting today with a friend who is interested in becoming a Civil War seamstress. She has a long history as a professional theater costumer and designer of ice skating costumes. Her unemployment checks, however, are about to run out.

Oh, but there are so many potential errors when learning to do Civil War sewing. We had a nice chat though and I let her look at some books, patterns, and the originals in my collection. In return, she's going to help me make my own pleating board, which I've wanted for ages and not been able to afford.

In relatively old news, my Winter Madness swap package arrived the second week in January, only one month late! I had actually given up. I don't blame my swap partner; I think it was the German mail system or US customs.

Anyhoo, it was a lovely package. 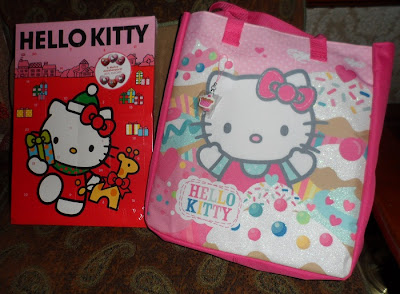 The Winter Madness idea is to send everything necessary to make a project from the spoilee's wish list, plus any extra goodies that won't blow the budget. She included a little bit of all the things that I like. First, she figured out I liked Hello kitty , so there was a Hello kitty Advent calendar (who knew there were such wonders in the world?) and a very sturdy Hello kitty project bag, complete with cell phone charm. 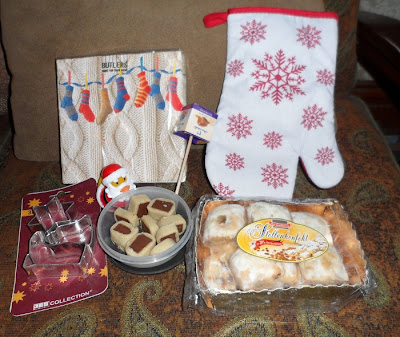 Inside were all sorts of delicious goodies and holiday treats: paper napkins with knitting images (I used some of these for a knitting social I hosted the next week), cookie cutters and a potholder, delicious homemade marzipan with nougat, incredibly fresh mini stollen, a yummy chocolate cube (which I was apparently supposed to swirl in hot milk to make hot chocolate. I don't know German, so I just ate it), and a Santa duck. 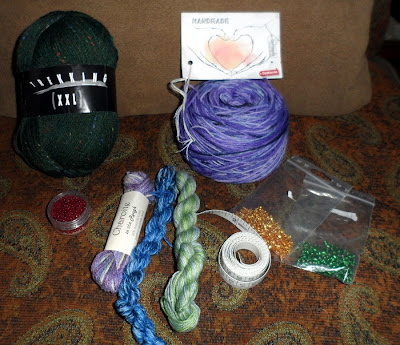 Finally, she included not just the materials to make one project, but two! On my birthday, she had gifted me with the pattern for a Holly and Ivy scarf. Her kit included the yarn and beads in traditional red and green, but also a gorgeous purple yarn complete with green and gold beads so that I could make the scarf in Mardi Gras colors. Plus, there were three mini skeins for my sock yarn blankie and also a tape measure.