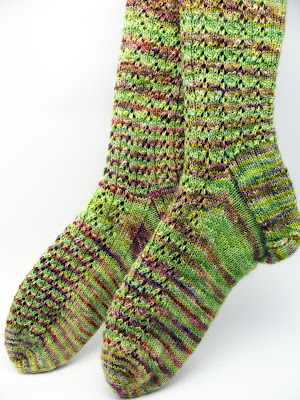 The green lacy knee socks are done, so I can add another item to my queue of five. I hadn't quite realized I'd made this a firm rule for myself, yet I have apparently internalized the number of five as a reasonable number of knitted items to juggle at one time.

That leaves the following:

While the undersleeves are nearly done, I've cast on a pair of socks. I'm back up to five.
I am **this** close to giving up on the black sontag, in spite of it being nearly 90% done. I remember now why I didn't like the pattern; it wouldn't fit an actual human. I attempted it years ago, then ended up just knitting a sontag to match the shape of an actual bodice. I loved my green sontag, but accidentally felted it and had to sell it. 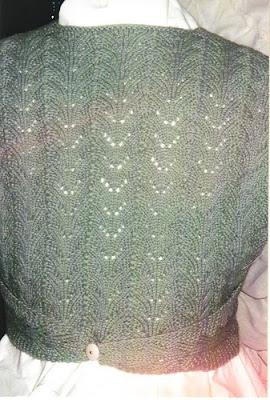 A few months ago, I joined a sontag KAL and attempted the pattern again, albeit in seed stitch. It looks just as distorted as the last time. Even I, a process knitter, can't bring myself to finish it. For the last two weeks, I've been hauling it upstairs and down, yet haven't quite gotten to the point of ripping it out entirely.

Until then, it remains in the queue of five--the queue which is full.
But look at this! I want to rush right home and make this. Right now!
Posted by 7-letter Deborah, never a Deb at 4:17 PM

That sontag is so beautiful!