I'm behind on posting, I know, yet since I vowed "no excuses", there's not much point in offering excuses, is there?*
Anyhoo, for my outgoing Day of the Dead swap, I did most of my shopping in the first week of the eight-week swap, then most of the crafting in the last week. In between, I largely didn't think about it much. Still, it ended up being a fun swap, and I think my partner liked her goodies.
I was challenged a bit, because my partner didn't seem to like the classic Day of the Dead colors of yellow or red, nor stitch markers (and I love having Suzanne make stitch markers), nor project bags.** I decided to focus on a lime theme (that's Mexican, right?) instead. 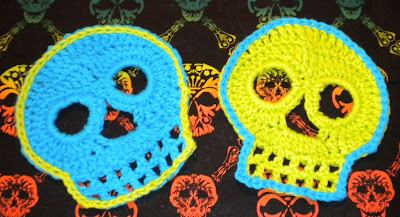 I practiced my new-found crochet skills by making some skull coasters. You can tell they're "new-found" skills because one of the skulls has more teeth than the other. I decided the extra teeth fit in with the folk-art theme. I've gotten some coasters in swaps and ended up using them more than I thought I would.

I had really, really, really wanted to make the Yorick scarf , which a lot of people have needlefelted to make more Day of the Dead. My partner had asked for no wearables though. Like coasters, I've used swap headbands way more than I thought I would, so I hoped a headband didn't truly count as a wearable.

I headed to the Mexican groceries and flea markets over on the east side of the river and found some fun scores: 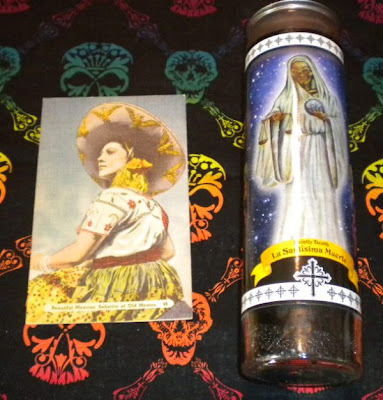 a postcard from a postcard show and a Santa Muerte*** candle for the ofrenda. 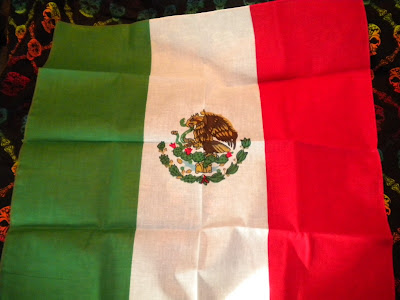 At the flea market I got a Mexican bandanna. A Bosnian gypsy woman tried to sell me some other stuff, but I had to explain to her that she did not fit my theme. 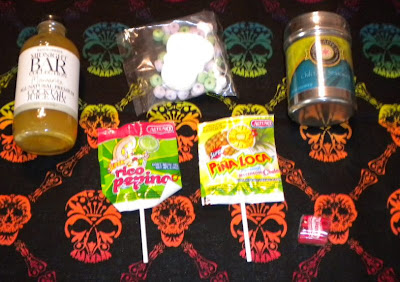 The Mexican grocery store provided some fun candies. I had hoped to find loteria cards, which they've had in the past but no luck. Last year, I schleped to about five different Mexican grocery stores, but in an effort to be more reasonable this year, I gave up after just one.

At Marshall's I found a tiny bottle of margarita mix, some chili-lime spice, and ... 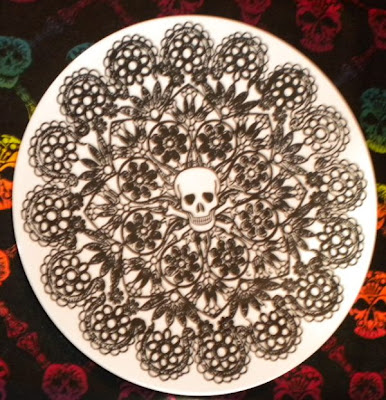 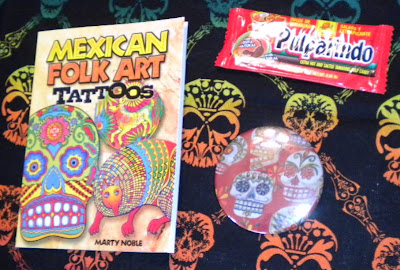 I found the tattoos at the art museum and spotted the compact in a gift shop. 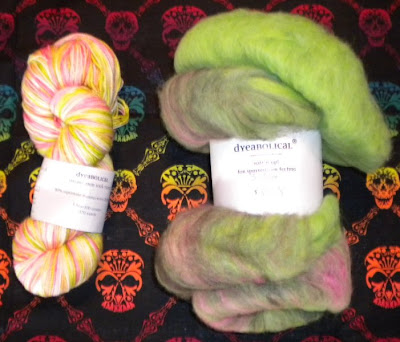 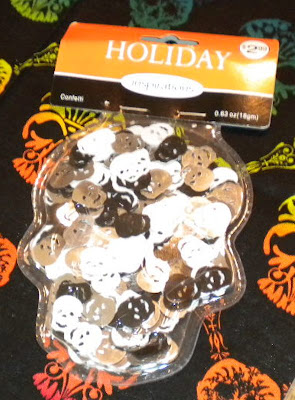 Finally, I threw in some skull confetti. In the past, I would have opened up the confetti pack and sprinkled it inside the box so that all the little skulls would scatter festively about when the package was opened.

*On one day I did write a scholarship nomination letter for a student. Makes me sound noble, doesn't it? For some reason, I'm trapped in the land of rhetorical questions today.

**All that lovely background fabric was intended to be a project bag. No worries--I'm sure I'll find some use for it.
**Santa Muerte is loco--seriously! There's a cult which may be related to drug dealers and some sort of belief that you can bind your lover to you by moistening a cord with his semen and tying it around a Santa Muerte candle.
Posted by 7-letter Deborah, never a Deb at 11:49 AM