A Full Tank of Gas

On Saturday, LB wanted to check out a reenactment at the Lewis and Clark museum near here. It ended up being the world's smallest event, the highlight of which was one astounding example of boobage (as in one boob; the other seemed tidily in place) attempting to escape from being painfully squashed. I'm not an expert in late eighteenth-century corsetry, but it didn't seem practical to me, let alone aesthetic. All I kept thinking was, "Wow! Is she going to get an awful sunburn!" Actually, I also kept thinking, "Do boys really like that? Really?" Maybe I was the only one who noticed.
So we left, and realizing we still had a full tank of gas, kept going until we found another random reenactment an hour north.
On the way, I found this great little knitting tin (missing its lid). I already own one with a lid, but for 50 cents couldn't pass this one up. 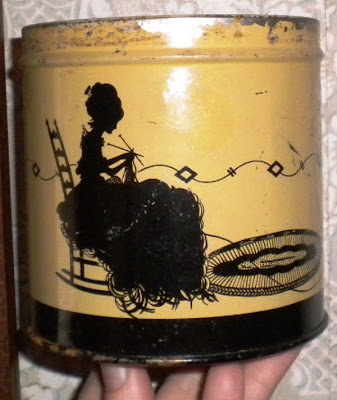 The next reenactment was a sort of Old Settler's Days and community wide yard sale. There was a petting zoo, a guy doing a bullwhip show, firemen running a fried carp stand, and a buckskin-clad guitar player with a "Don't Blame Me; I Voted for the American" bumper sticker on his case.*

Having gotten stuck by the drawbridge on the way up, Steu got to go on his first ferry ride on the way home. 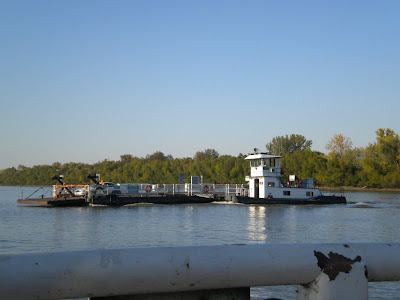 On Sunday we took him to the Canine Games where he barked at the diving dogs, excelled at lure coursing, and completely flopped at fly ball. He also watched an agility tournament. 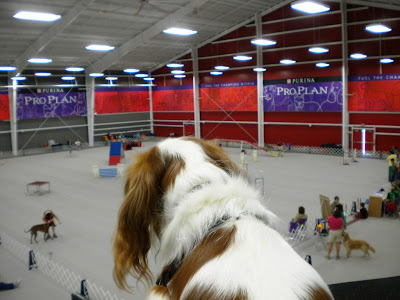 He says he might like to try it sometime, as long as he only has to listen whenever he feels like it.
__________
*I didn't get close enough to actually detect a semi-colon. I suspect my editorial license is more grammatical than the original.
Posted by 7-letter Deborah, never a Deb at 12:29 PM