Anybody Know a Three-Legged Baby? 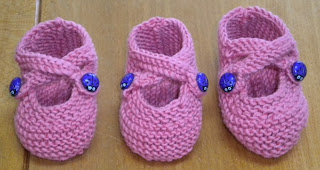 Using the yarn I got in the Cavalier swap, I knitted a pair of Saartje's Booties. When I was done, I realized one was about half an inch bigger than the other.

My gauge had relaxed. I had to knit a third.

Then, in an attempt to avoid spare-bootie syndrome, I tried to knit a fourth by going down one needle size. Not surprisingly, it was smaller.

I finally just gifted the two booties, kept my mouth shut, and refrained from making any three-legged baby jokes to the mom-to-be.

Had those been black with pink buttons, I would have thought it was for an Addams Family baby.

Hilarious. Keep one. Or better yet, make just one more and save it for another babe.
-meeko

Hey, she/he may lose one! Don't babies often kick off their shoes?

You could always stuff it, make into a pin cushion. Are pins still used today? Sigh...I live in the past...LOL
Susan