On Tuesday, I got an unexpected opportunity to KIP and met Ann and Rachel at BreadCo. Ann kindly modeled some Civil War arm warmers I just finished for a friend. 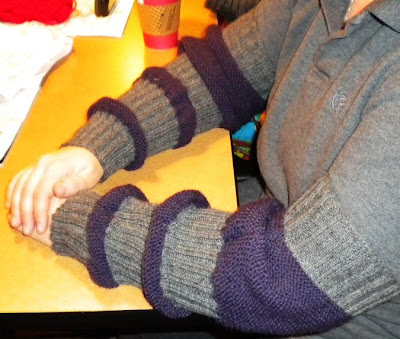 We'd been there for about two hours and I'd been enjoying watching teh crazy. One woman had asked to share one of the couches by the fire; some poor dear already on the couch quickly had enough and moved. The invader then propped her feet up, leaned back the length of the couch, and opened a giant box of stinky black licorice (N.B.: BreadCo. does NOT sell licorice).
Just as it was getting time for me to leave, I accidentally made eye contact. Oops! The invader practically launched herself off the couch and across the restaurant in her excitement. While I was hiding out in the restroom then gathering up my belongings, poor Rachel and Ann got an earful. The invader moved off the couch and moved to our table as I scooted out the door, feeling proud of my narrow escape.

Karma got me back as I realized I would be an hour early for my dental appointment and decided to visit The National Great Rivers Museum to kill time. I did the computer simulation of piloting a tug then signed up to tour Lock and Dam #1. 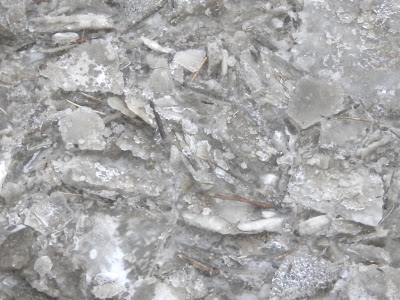 Those tiny little sticks in the photo are actually tree trunks. At the moment, the flood gates are wide open to let the ice from upriver flow down, hopefully lessening some of the flooding we're sure to get this spring.
There was ice as far as I could see.
When it came time to go back though, we realized we were stranded out in the middle of the river. 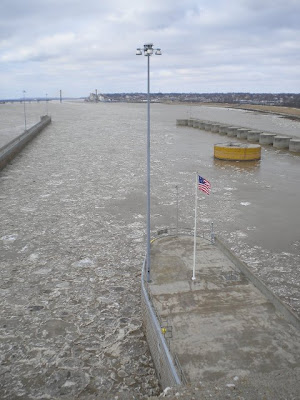 Obviously I made it back, but I hereby sincerely apologize to Ann and Rachel for bringing teh crazy into our lives.