I thought I was prepared to get a dog, but I still knew we'd be in for some major changes. One thing I hadn't considered was needing to buy new pants.

No more lounging about in pajama pants, lest I find myself on an unexpected dog walk.

Can't make the morning walk in work clothes, lest I acquire a muddy paw print.

I also thought that my dog would not need any clothes. Cavaliers have long, natural coats and can tend to be a bit chunky. I didn't want to be accused of getting a dog just as an excuse for more knitting.

Steuey, however, still has his wispy thin puppy coat and is wiry as all get out. He's been shivering in the damp evenings and snuggling up tight whenever the windows are open. 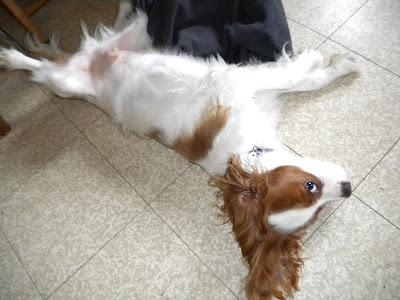 Steuben in hotter weather
I also suspected that LB would be very anti-dog clothes, Nature Boy that he is. He groused when he thought Steuey's first collar was too fancy. I returned it and got a plain black one. LB is even more wiry than Steuey though and perhaps can empathize.

When I tentatively suggested a dog sweater, LB didn't fuss. To test his resistance, I even asked for some color suggestions. He nixed the self-striping and the denim blue. He wanted a reddish to match Steuey's coat. 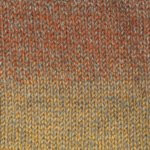 Yesterday, I cast on and knit a sweater out of Encore Colorspun. It ended up being too small, so I'm reknitting the next size up, but come next week, my wee boy should be a lot warmer.
It would be truly evil to knit LB a matching hat and scarf, would it not? Can you imagine the Xmas card? It would be almost as evil as this.
Posted by 7-letter Deborah, never a Deb at 1:36 PM

I vote for matching spouse & dog!

Oh poor shivery Stu. And how could you NOT make matching sweaters for master and dog? It was meant to be.

Also...I know you went to that website because of HK!