Last night, my friend Megan told me she checked my blog a lot, but didn't care about the knitting stuff. She only wanted to know what was going on with the dog.
This post is for her (although I promise a wee bit of knitting talk).
We had intended to take Steuey to another reenactment last weekend, but the closest one LB wanted to attend necessitated a four-hour drive, and we would not be able to leave until 6 p.m. A closer one was a time-line event (a hodgepodge of WWI, WWII, Civil War, Fur Traders, cowboys, and lord knows what else, maybe some knight errants even) and was deemed too farby, even for dog training purposes. At the last minute, we decided to stay in town.
On Saturday, we headed over to the Strange Folk festival, which others have posted about much better than I, with pictures even. Since it was held in a park, we decided to bring the dog, but after the long trek over the river, I spotted the signs around the park: No Pets in the Park.
I'm a big believer in obeying the dog rules, and I totally get a rule saying "No Pets in the Playground" or "No Pets on the Ballfields." But no pets in the park, period? That I don't get.
This wasn't one of those tiny block-square city parks either. It was big enough to have a playground, a pool, several ballfields, large grassy areas, and several buildings. LB and I were willing to take turns in the park, with the other standing sadly outside, gazing at all the crafty loveliness off in the distance, but we spotted lots of people walking dogs, dog rescue groups, and even a pen of alpacas. One couple was walking their ferrets.
LB talked me into civil disobedience, so I decided to see how Steu would do being carried in a backpack in front of me, something I'd been wanting to try for awhile. He did great for over an hour and then finally got squirrely.
I wish I could say I supported the local crafts, but I only did so in spirit. Through a mix-up at one of my schools, I didn't get paid on time, plus I had given up two shifts at my LYS to go out of town this weekend, so I didn't have that money either. However, if I had been rich, I'd have bought some Day of the Dead barrettes and a dustpan made from a vintage license plate and with a turned-wood handle.
And let's be honest, I also would have bought yarn (and let's be honest, that was the "wee knitting bit" for the post).
Afterwards, the three of us (me, LB, and Steu) drove back to midtown and sat in the car for about an hour, waiting out a torrential storm. LB had wanted to go to the Green Homes Festival, only fair since I had dragged him around a craft fair for most of the morning. After the storm slowed to a drizzle, we wandered around looking at tents for energy audits, green cleaning, and solar lighting.
On Sunday, we headed out to Purina Farms for the Canine Games. I've always wanted to go to the Purina farm, so after almost twenty years, the games finally gave me the incentive.
We watched the dock diving display twice and tried four different events. Other than showing no interest in retrieving (he does at home, honest!), Steu did great at the other three. First, we got clocked with a radar gun at 20 mph. Then we tried agility, which went great. He wove the poles, went through the tunnels and the tires, climbed the A-frames, jumped the hurdles, and came when he was called. We finished off with a tricks class (shake, roll over, and reverse).

Then he came home and took a great big nap. 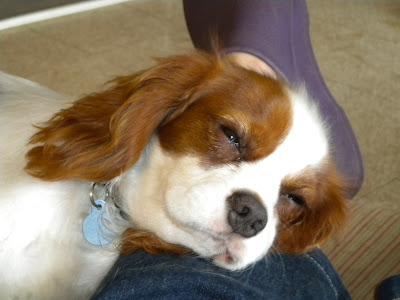 That's a pooped puppy you've got there! What a sweetie :-)

I really want to see how Roxie would do at Purina Farms Canine Games sometime. I don't think she's any great agility hound, but I think she'd kick butt at the speed test!