By way of a status report on the socks, witness Exhibit A: 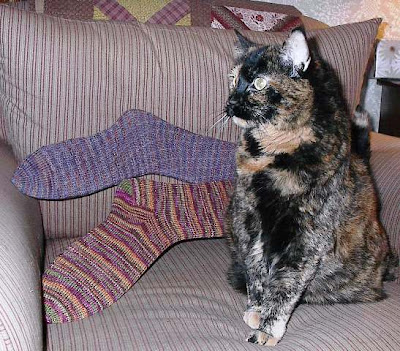 Sock Projects #1-3 are done. Sock project #4 is back on track, with about 2" of the second sock underway. Sock Project #5 and Sock Project #6 are each halfway done and being presented to the public by Yma. Things are progressing in a logical order, which always makes me feel much better.


I'm also happily cooking again. I cooked all winter, but the grey light never did make me feel like taking photos.


I went through an Amish friendship bread phase. This version (one of my last) used pistachio pudding, chopped pistachios, and chopped dates. Let's just say, everyone is glad that phase is over. I've started using all those pudding packets to make actual pudding. 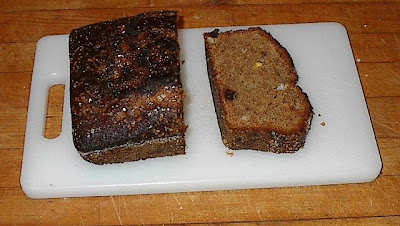 Now that spring is here, I've cracked open one of my favorite cookbooks, Having Tea by Tricia Foley. On Sunday, I made the recipe for slow-scrambled eggs and served them along with smoked salmon, cream cheese and capers on rye crisps. My sister loves this recipe, but for some reason I haven't made it often. No pic, but I can provide the recipe:
On Tuesday, I made buttermilk scones served with fresh butter and lingonberry jam: 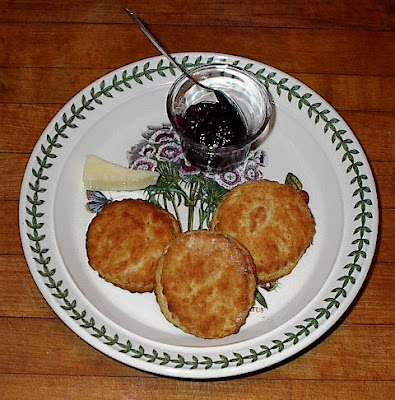 LB brought back another slab o'bacon from his road trip. 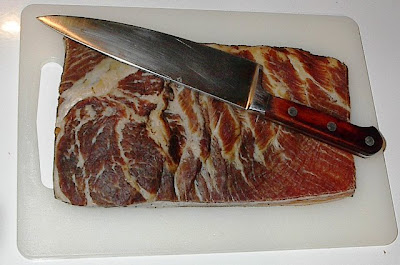 It's smoky and salty and fabulous. It's been eaten straight with many an egg and has also made its way into quiche, baked beans, and, last night, andouille (Fair Shares) with okra and tomatoes (also Fair Shares). 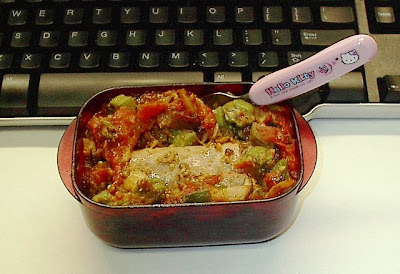 The sheer unctuous quality of this bacon combined with the okra, which has its own unctuous issues, blew my mind.

And when you can use the word unctuous in a sentence, you should.
; )

I want to try shape note singing. I have for some time now. I just am not in the right spot in my life, I think, to take on a totally new hobby. Tell me more the next time I see ya.

That okra and bacon looks wonderful! I can't wait to see your Belleville postcards, I may not get there till Sunday, but I'm sure they'll have plenty of junky ones left! (That's another good thing about junk -- plenty of it!)

That egg recipe is amazing. Takes awhile but is completely worth the effort. And it's very kid-friendly: I fondly remember many mornings with the preschool-aged niece and nephew perched on a cooler, folding the eggs. They felt helpful, I got my caffeine going, and everyone else woke up to a succulent-yet-fluffy breakfast.

The book is worth it for that recipe alone, but even more so for the scone and carrot cupcake recipes.