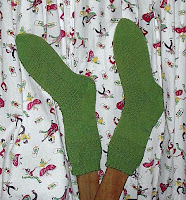 A search of my Ravelry projects reveals that, out of the last seven projects I have begun, six are sock projects. There's one cardigan, started and finished, but I've paused neither to photograph it nor to block it.
It's all socks, all the time. No wonder I am suffering from a shortage of 1s and 2s.
I began the third sock project of 2009, bright green St. Pat's socks, on 1s. Made one. 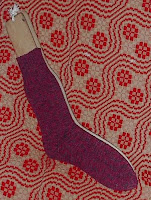 In the meanwhile, I fell in love with some Plymouth Happy Feet in reds and plums and pinks. I counted myself beyond fortunate to have a husband who would wear such beautiful colors. As soon as the first St. Pat's sock was done, I started his sock (Sock Project #4) on the newly freed-up 1s.
At the ankle, I changed to 2s, thus being able to finish the second St. Pat's sock (Sock Project #3) on the 1s.
Which I did. In Michigan.
Where I did not have access to the remainder of the Happy Feet in St. Louis. 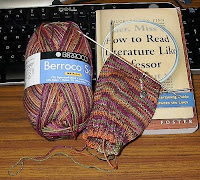 To prevent the horror of being trapped in a foreign land without knitting, I began a very basic sock in Berroco Sox Metallic on 1s (Sock Project #5).
Since I bought the yarn in Michigan and because it's not a yarn my LYS carries, I don't really knit on it at work. Thus my 1s are still tied up.
When I got back from Michigan, I mailed off Sock Project #2 as a gift to my mother. Then I fell in love with one of Rachel's new sock yarns, again for LB. The pattern he picked called for 1s, which were still on the Berroco Sox. He remains with one plum sock (Sock Project #4) and one skein of yarn in the queue.
Also while I was in Michigan, yarn that I special ordered arrived at my LYS. One has a certain obligation to purchase special orders in a timely manner, so I did. Plus, since I special ordered it through my LYS, I can work on it there. 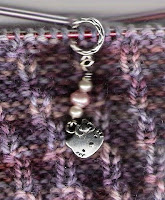 
I was also a rock star on Friday. 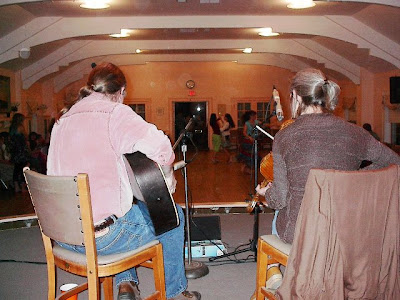 I was told the crowd was sparse because many of the regulars "don't dance during Lent." Let's hope they don't get wind of this:
2008 YDW Techno Contra from Forrest O. on Vimeo.
Posted by 7-letter Deborah, never a Deb at 12:58 PM

Maybe you need some more size 1 needles :). I love the bright green socks!

And, not to be an 8th grader, but the word verification word is pubie. Hee!