Postcards shows are pretty odd places. Delitologists drag about their wheeled carts with their binders and their lists and spend up to two days going through the tables. They complain loudly about ebay and cell phones and other modern inconveniences. Although they may make a brief, awkward attempt to hit on the one single woman who shows up, they're more interested in finding that last missing postcard and crossing it off their list.
At the semi-annual postcard show last week, I took Suzy's advice and limited myself to the discount bins.
Ebay and such have lowered my tolerance for discount bins. Want to collect postcards of cheese? Leap Year?** square dancers? knitters? A few key strokes, a willingness to pay, and you can.
The same holds true at postcard shows. As far as prices, the most expensive postcards can be found in binders behind the table. I seldom look in binders because prices tend to start at $15 and could go up 10 times as high. The next most expensive cards are in divided boxes. Prices range from $2 to about $30.
Each vendor brings in thousands, tens of thousands of postcards. Leap Year usually gets its own section, cheese shows up in the food or Dutch sections, square dancers show up in the dance or music sections.
Knitters are much, much harder to find for some reason. There are categories for spinning wheels and sewing, but never for knitting. I've had some luck looking through foreign postcards for costume shots, but finding knitting can be pretty much a crap shoot.
I only had $6 to my name, and although in the past I've paid at least that much for a single card that I wanted, this time I knew I wouldn't be looking at any of the sectioned boxes. It would be the discount bins only for me.
I managed to find five knitting postcards, one spinning postcard (for Ann), and one October birthstone postcard (for my sis).
Here's the first: 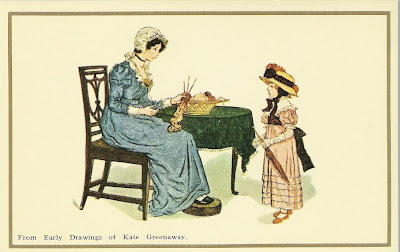 "Cheese shows up in the Dutch section." I laughed till it hurt over that one! It just hit the delitologist funnybone right there!