I was felled by a cold this weekend, so much that I even cancelled class on Friday. I spent the day in a feverish haze, alternating between curling up under a quilt on the couch or finishing a sock while watching Buster Keaton and Fred Astaire films.

One of the Buster Keaton shorts was The Play House, where Keaton plays at least twenty different roles, including one as a monkey. I've been to some Keaton film festivals, but never seen this one, which was mind-blowing. You've got to have a tolerance for silent films though, and many do not.

My spaciness on Thursday should have warned me though. All day, people kept making foolish knitting errors. There were problems reading charts, dropped stitches, misreadings of patterns, etc. I, however, beavered along, smugly and proudly turning the heel of the sock and decreasing the gussets. Everything was going swimmingly.

When I got home, I suddenly recalled that I always have to go up one needle size for the feet of LB's socks. He's got bird legs, but the broad, flat feet of a field hand. Out came about three hours of work.

Another sock I was working on for myself had similar heel problems. I thought I could live with an asymmetry in the foot ribbing (if this makes no sense, don't worry about it; it makes sense to knitters), but a too-broad heel cup and something else sent me over the edge. I ripped it all out and rewrote the instructions. 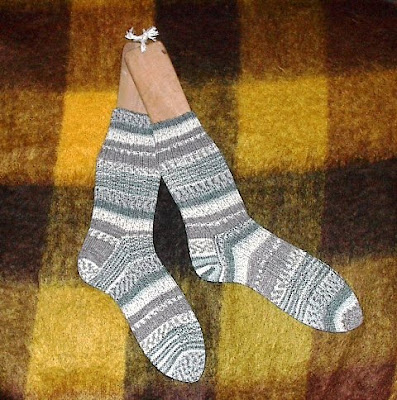 A note on the yarn. This is the Hedwig colorway from Opal's Harry Potter series of yarns. I previously made a pair with Ron as well. The Ron had one knot in in; the Hedwig had two!

Look, I knit. I've gone through a lot of balls of yarn in my life. I understand that knots happen. The percentage of knots seems particularly high lately, across brands. And when I find multiple knots on a single ball of yarn ... well, that's just not right.

Dealing with a knot on a sock is a pain in the ass. You have to be really careful where you join the new yarn--never on the bottom of the foot.

Dealing with a knot in a self-striping yarn can be a pain in the ass if you want to keep the striping pattern consistent.

Dealing with not one, but two, knots in a ball of self-striping sock yarn that retails at nearly $25.00 a ball?

Dear Opal, you're officially a pain in my ass.
Posted by 7-letter Deborah, never a Deb at 12:38 PM

Maybe more knots is the industry's cost cutting measure - like lighter boxes of cereal they hope we won't notice. Knots matter, though, and we should rise up in arms with torches and the like and give them a piece of our minds! Or at least demand replacement yarn.

I hope you didn't catch a cold by reading my blog! I just got my first one of the season, too. Yuck. Hope you feel better!

Oh, Deborah, I'm so sorry you've been sick. Wish I could have brought you some soup!

No one else has it that I know of. Hope you're better by now.

You know how I feel about knots. Mission Falls 1824 Merion, you're on my list.

Consider the knot-discovering a public service to other knitters! I've crossed the HP yarn off my list.