The explosion in the number of knitting publications out there seems to have led to a corresponding explosion in errata. Errata pisses me off.

Years ago, I spent eight hours helping a friend figure out a baby sweater in Last Minute Knitted Gifts. I finally rewrote the pattern. Later, when I found the errata online, I realized the errata had errors.*

My copy of 2-at-a-Time Socks had significant errata. Worst of all, the errors were in the tutorial sock. Way to make sure that no one ever knits socks two at a time!

My latest problematic publication is Noro Mini Knits. The one pattern I picked has an error in the raglan sleeve shaping. 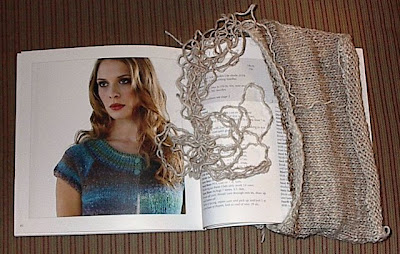 Here's what I want:

*It's debatable, of course, but I'm going to argue that "errata" is a printed list of corrections and not the errors themselves. If I want to talk about the "errors" in a book, I'll use the perfectly lovely term "errors." A bit like "signage," no?