Ann, Rachel, and I watched Wool 100%, totally at my instigation. I thought it might be fun to have a movie night at my LYS, given that Wool 100% is a Japanese movie about knitting, but thought that I ought to give it a sneak preview in case it was too explicit or violent or whatever.

Saying Wool 100% is "experimental" would be a bit of an understatement. The whole time I was watching, I kept hearing some imaginary knitting guild lady's voice in my head. This imaginary woman's voice kept getting louder and louder as I watched. She did not like the animation. She did not like the puppets. She did not understand the jumps in time. It even reached the point where I could visualize her turning around to complain loudly to anyone within earshot that she did not like this movie ... AT.ALL!

Wool 100% wouldn't make a good knitting movie. First, it's subtitled, although there isn't much dialogue. Second, it's very dark, both visually and emotionally. The two main characters live in a house so cluttered that daylight barely makes it in. I spent much of the first half just squinting at the screen.

All in all, in spite of the efforts of the imaginary knitting guild lady to ruin it for me, I loved the film. Great color, beautiful objects, a sweet story, interesting characters, rich symbolism, fun humor.

Afterwards, I went home and made my second attempt at home-made sushi, which was my first attempt at an inside-out roll. The whole process took hours and hours. I rehydrated some dried gourd; I made dashi with bonito flakes and kombu. I rolled the rice in fish roe. When it was all said and done, they turned out only okay. The taste is very good, but they're not as visually pretty as I would like. 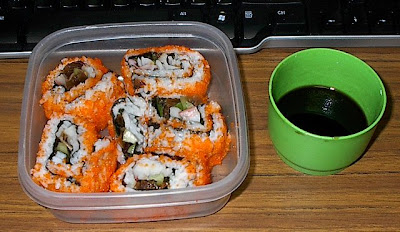 Still, they made a good lunch today, which is a good thing, because I needed fortification after trying to convince my students that the following sentence is confusing and unintentionally funny:

Never before have I encountered such resistance. I was told that the sentence makes perfect sense, that only English teachers would find it confusing, that no one else would be confused so why should we care, that modifiers don't change the meaning of a sentence, and that I was trying to go against the natural activity of the human brain. That last one is pretty much a quote. I was impressed with his logic, but jesus.

I longed to be the Japanese school teacher in Wool 100% with her students in their little uniforms and her with an accordion, everyone standing together to sing a sweet song about a lamb who swallows an apple and ends up with red wool.