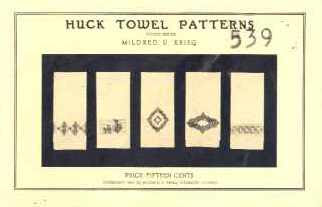 For Yoel:
Huck towels aren't really special--maybe it's just me.
Huck toweling is a type of woven cotton fabric. You may have seen it on those old blue cloth towel rolls in gas stations or old diners. It's similar (but not exactly the same) to Aida cloth that cross stitchers use.
During the 1930s and until the 1950s or so, it was popular to do a type of embroidery on them called Swedish weaving. The floss was woven through the top of the towel and didn't show on the back. The designs tended to be bold and geometric.
Generally people made towels, but I've seen aprons, pillows, valances, table runners, antimacassars, etc. There are also pattern books out there like the one above.
Colors tend to be the colors of what were called "powder rooms" since that's where the towels hung. And you can see the trends in bathroom colors: lots of pink and green, quite a bit of baby blue, but also a surprising amount of black and turquoise. I've found that the rarer colors are burgundy, gray, and orange.
If you click on the Swedish weaving tag on my post, you'll see some of my collection.
I've been collecting them since the mid-80s and probably have about 250 examples. Prices have climbed quite a bit, but I currently limit myself to $3 or less per towel.
Like I said, they're not hugely special, but I like them for their graphic quality and vivid colors.
Posted by 7-letter Deborah, never a Deb at 10:12 AM

Cool! I'll have to start looking out for them!