It Ain't Over 'til It's Over

When are the Olympics "over" actually? They aren't even every four years any more.

All I know is that I had sixty-three stitches left to cast off when Jacques Rogge proclaimed the Olympics "closed." I had finished casting off and weaving in the ends before Jimmy Page did his thing and was cooking dinner when the flame was extinguished. Besides, given the time zone, by the time I watched it on tv, it had all long been over.

It wasn't until the grey dawn of this morning that I took this photo (hence the over-corrected color): 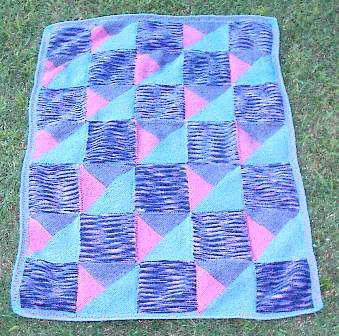 Nothing special really. A 42"x60" afghan in colorwork garter stitch with a colorwork border. Begun in 1994 and languishing since about 1995. The yarn is so old that they sincerely advertise that it's made with "100% Monsanto Acrylic." The woman on the pattern has a side ponytail.