With our Fair Shares pickup a few weeks ago, we got a small bag of cherries. Inspired by Anna and by memories of past Christmas parties, I took the little bit of cherries and managed to make a pint jar of cherry bounce. 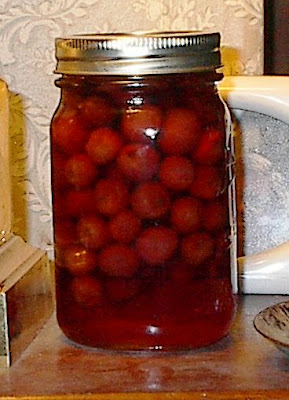 It will have to sit until Christmas, alas, but in the meantime I ran across this:

"... cherry bounce was once known as 'The Virgin's Demise' for its smooth and sultry power. These days it is usually made with vodka, which best approximates 'double rectified' whisky-- probably twice distilled corn liquor--pretty close to grain alcohol. But bounce can be dangerous,cyanide or no. Once in the 1870s a merry uncle of mine was making up a batch in anticipation of the approaching winter , and after straining the bounce itself, threw the mash in the gully behind the house. The farm's free-ranging turkeys subsequently wandered down and feasted on the fermented cherries and promptly passed out. An alarmed boy who worked on the farm subsequently rushed in to inform my three highly Victorian great aunts that all the turkeys had suddenly and mysteriously died. This was a crisis, since the family existed in the storied genteel poverty of the Reconstruction South. The aunts, however, after regretting that the obviously diseased turkeys could not be eaten, decided with the providence of the rural-born to at least salvage the feathers for pillows and dusters.The turkeys were thereupon plucked and returned to the gully. Whereupon they subsequently awoke and were found wandering around naked.It is a matter of chronicled fact that my great aunts promptly knitted up little cosies for the turkeys, to protect them from the autumnal chill,lest they shivver [sic] off too much weight to make a proper Thanksgiving or Christmas meal. The sweater-clad turkeys inspired much merriment in the area, but the aunts had the last laugh. The family feasted well on the holidays on what ate, by all accounts, like the very turkeys of all the world."

Thanks for your kind words on the bus ride. It was the #11 bus, and he hit the light coming out of the Shrewsbury metro stop. It was definitely a real accident, as in "This bus isn't going anywhere; you'll have to get off and wait for the next one." While I'm happy for the blog fodder, I'm also happy that I wasn't knitting. I'd definitely have stabbed myself. Still feeling wrenched, but I'll be back on the bus tomorrow.

Hah! I bet they had a grand old time making turkey cozies.