Left to my own devices, I would spend all of my day reclining, ala Madame Recamier. 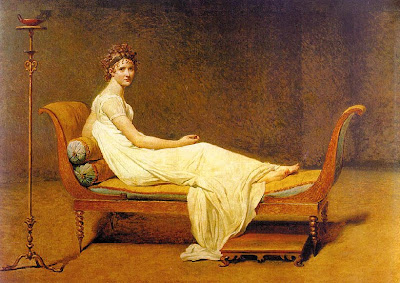 I would wake in the morning, languidly stretch, have the maid bring me a Pepsi One and a bendy straw. I might prop a pillow behind my back and read for an hour. Later, I would make my way to my chaise, recline and knit, or read, or knit and read. Sometime in the late afternoon, I'd progress to knitting and watching television, still with my feet up. Around ten, I'd head off to read in bed before repeating the cycle again the next day.

On those days I felt particularly energetic and in need of fresh air, I'd head out to the breezy but shaded veranda by the pool and have the cabana boy bring me frosted cocktails while I traded my chaise for a deck chair or a hammock.

Such a life is not conducive to a willowy figure.

Nor, in fact, is the life of the mind. My days are spent sitting and grading, or knitting, or grading and knitting. Insert an arm chair and an ottoman and subtract the maid and the bendy straw and the chaise and the cabana boy and the hammock and the pool. A sizable chunk of my life is still spent horizontally.

This life has most decidedly not been conducive to a willowy figure, so I decided to get up and go to a free exercise class I saw at the library.

I was the youngest person in the class by at least 30 years, and I turned 40 in December. They had names like Dottie, Rita, Rose, Grace, Dora, and Millie. Their group had been meeting weekly since 1937, Dora told me. "Of course, over the years some of the members ..." she said, before her voice trailed off. "I see," I said empathetically.

So there I was, my joints creaking and popping with the rest of them.

It made me so tired, I just wanted to lie down.
Posted by 7-letter Deborah, never a Deb at 4:12 PM

I LOVE your exercise class already!

1. I have a little pamphlet I rescued from the bin for you and LB.
2.I noticed on profile that you liked Margaret Atwood. I do too, Robber Bride is my favorite.