Some Mystical Creations yarn has suddenly entered my life. No, I did not pay for it. 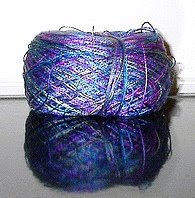 If you haven't been following the thread on Ravelry, here's the deal. The owner has variously (and largely in this order) allegedly perpetrated the following:

Accusations have flown around anyone even remotely related to MCY, people who have bought base yarn from her, worked for her in the past, etc.

I'm facing a dilemma myself. I have long been fundamentally incapable of throwing away even the tiniest nubbin of yarn. I now have 5 skeins of MCY yarn. I did a bleed test on this silk and it hardly seemed to bleed at all, although I hear the other four skeins are prone to bleed. Throwing away five skeins of yarn would cause me almost physical pain.

In addition, I am totally a process knitter. I am all about the knitting itself and very little about the finished project. I leave things unfinished, unblocked, unwashed for ages and ages. There's a part of me that does not care if the finished project is totally unwearable. It's why I've knitted so many fugly items.

It's a dilemma. I may need to try the technique I read about this week in an article on hoarding: consider what my emotions would be if I threw the yarn away. I'll probably bury it in my stash for awhile until the urge to knit with it subsides. Then perhaps I can let it go.

Yay! Coming to work with us! And fixating on MYC. Yay!

You could always make something for your sister with it...