"I Need an Opinion" 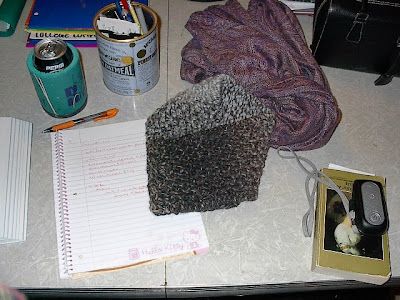 A friend asked me to knit him a Fidget, my fourth in as many weeks. He wanted something in grey or black, but said he had "always wanted something with leather buttons." Sigh.
So, I found some yarn and went to several stores in search of leather buttons that would go with it. In the end, I found myself at Hancock Fabrics and narrowed it down to three kinds of leather buttons: more brown than black, more black than brown, and all black.
I buttoned a button from each card through the three buttonholes and headed to the cutting table to get a second opinion.
"I need your opinion," I said, laying the Fidget and buttons on the table.
The clerk stared at it very intently for a long time. I studied her furrowed brow, looking for some clue as to which shade of button she thought best.
"Well," she said, finally. "I think you did a very nice job."
Posted by 7-letter Deborah, never a Deb at 4:43 PM

It wasn't Linda was it? 'Cause she's a knitter! So you went with the black? Nice.

I finally ended up at a Hancock's in Illinois and ended up going with the "more black than brown." Trust me, the differences were subtle; that's why I needed her opinion :)