After three failed attempts to spell "twelfth," I gave up and opted for "12th." Fortunately, I ran into it on another blog, but my failure is probably a symptom of my exhaustion, which is exactly as it should be after a particularly good Twelfth Night.

Thus begins my absolute favorite holiday of the year.*

The Twelfth Night parade took place in 70 degree weather, but because it's a semi-secret, nighttime parade, consists only of locals. There are moments every year when I look up into the leafless trees against black sky and see masses of flying doves startled out of their perches by the sounds of Brazilian percussion and whistles. We wave to the silhouetted residents up in the third floor windows and raise our glasses at each local bar. In dancing to the beats, we probably walk twice as far as the actual parade route before gathering to hoist the Mardi Gras flag and watch the fireworks show.

Unfortunately, the parade ends near the river and roads can only go uphill from there. One margarita later and I felt I could make it back. I slept the sleep of the just.

Today, I turned the heel on my Emma KAL sock. 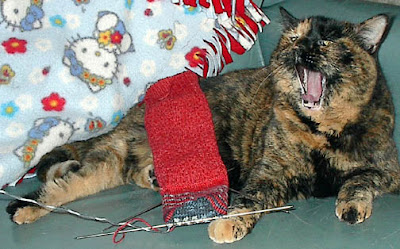 Yes, the party was a great success - I met some interesting people, enjoyed the punch immensely, and had a great time.