Largely by ignoring housework, class prep, healthy eating, and exercise, I've made significant progress on the first of LB's socks. There's not much to say about it, other than that somehow my row gauge is significantly off, at least in the stitch pattern.

When I ribbed the cuff for 24 rows, I was within a row of where I should be: 2.5". But when I began the 6-row repeat of the railway stitch pattern, somehow I was way, way off. According to the pattern, 11.5 total repeats from cuff to heel should have come to 8.5". It took me at least 6 additional repeats to get that measurement; that's a difference of 36 rows! 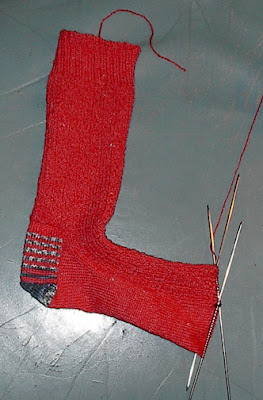 You would think that big a difference would show up in the heel flap as well, but it looks plenty deep enough. I just don't get it.

Because I have do so many extra rows, I'm also likely to need another ball of $20 yarn. Crap.