I've made zippo progress in grading since Sunday night. Neither have I knit, much. On the plus side, I've had only two hysterical melt-downs this morning, and did manage to get some nutritious food in the house and in me.
Last night, I stopped into JoAnn's. I swear on my honor that I was only there for a zipper.
Right inside the door, I saw this: 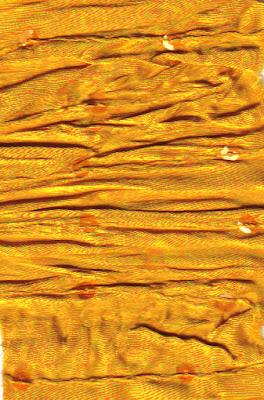 Perfect for a Mardi Gras broomstick skirt. Also 60% off. I'm a bit ticked in that it was cut well off the grain, but I think I can salvage the wonky bit for a waistband.
Then wonder of wonders, I found this beyond-perfect Mardi Gras brocade: 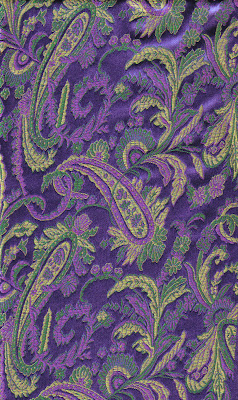 Also 60% off. I bought the remainder of the bolt, three yards. At the very least it's lovely in its own right, as a drape, table cloth, whatever. But imagine it as a quilted swing coat.

There's not much point in reposting my progress report, since there's been none. I did find a video of one of my Civil War knitted sleeping caps in action though. It's on the far right, and the film is very dark because it was filmed by candlelight.
Posted by 7-letter Deborah, never a Deb at 3:30 PM

I love that purple paisley fabric.

A SCREAM!!
Looks like it was filmed at Fort Scott Kansas.
Hig is scrapping the jawbone of an ass.