First, the rain prevented us from being Christmas trees. So here's the only look for the year at our costumes.

Maybe next year.
Everything I ate for Thanksgiving came out of either a jar, a can, or a box. Desperate for something to praise, I mentioned the unusual color of the sprinkled spice on the devilled eggs. It turns out that stuff colored like cinnamon was actually ancient paprika.
The EZ ribwarmer is done, except for the zipper, which is no minor obstacle, I can assure you. I need a 12-14" jacket zipper in a color that will coordinate with the following. I'm not holding out high hopes for JoAnn's. 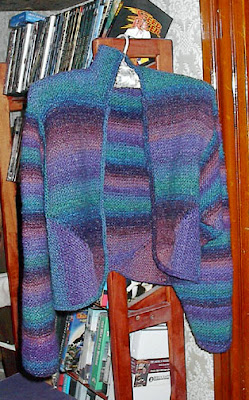 As is my wont, I actually began the next project within fewer than 30 stitches of finishing the EZ ribwarmer. In fact, the only reason I finished the EZ ribwarmer is that I ran out of yarn on the second project and didn't have a vehicle in which I could race over to my LYS. 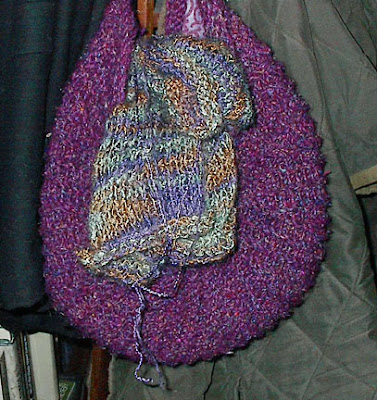 The Stitch Diva poncho, it turns out, does not take 2 skeins of $30 yarn. Two skeins of $30 yarn will only get about 2/3 of the way into the poncho.
I should be working on the 1800s mitts for the 22nd so that I can stay warm in a drafty dance hall. Instead, I returned to the Vogue Anniversary scarf. 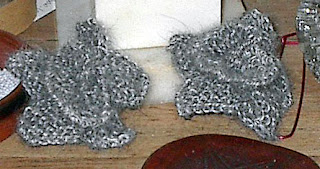 No new issues on this one so far.