Unlike seemingly everyone else I know, I did not go to the Bethel Sheep and Wool Festival this weekend. Instead, I went to Nauvoo. It was quite charming, especially the Labor Day parade with its marching band of about 18 musicians and its floats from the local nursing home, grain elevator, and pumpkin patch.
I didn't go into any of the buildings, but later I found a brochure so I know which sites have actual historic artifacts and are less likely to be crammed with missionaries. When I go back, I'll be prepared.
We also stopped by the rendezvous to learn about history. There I learned fascinating things like that it takes six months of "constant" spinning and knitting to make a damn ugly baby sweater. I also learned that in the eighteenth-century there was a fabric mill in St. Louis and France sent thread to it and traders could buy US-made calico. Finally, I learned that even though a certain calico looks so modern that it could come from the Laura Ashley outlet, it's really a documented print because an Iroquois women explained ...
Actually, I believe none of this crap, and I don't want to even repeat the fabric theory lest I perpetuate it. Let's just say that the best way to learn what kinds of fabric women of a certain era wore is to study lots of textile books, quilt books, and original garments.
And don't just take anyone's word for it, even if she is Iroquois.*
I also managed to get in some antiquing. All in all, the haul was good: 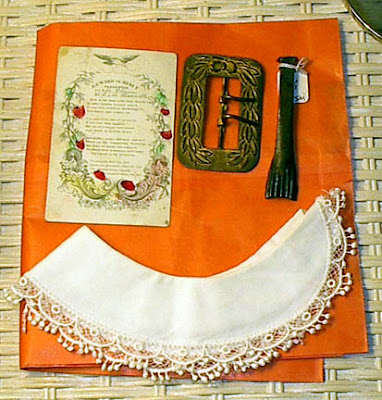 I seemed to have magic eyes this weekend. Every time I looked through a pile of modern stuff, I was able to spot the one nineteenth-century item, whether it was the only two documented prints buried in a stack of remnants at a quilt shop, the coin silver on a pair of eyeglasses, the late-war CDV in a stack of postcards, whatever. It was a cool feeling. 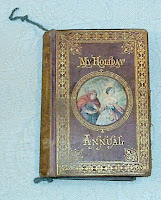 A quick glance through six tables of used books turned up the only two 1850s and 60s volumes. I know because I took several much, much longer looks subsequently. I ceded those books to another, but I wanted to show off the best, an 1860s holiday annual. Holiday annuals were gift books put out by various publishing companies around the holidays. They often contained short stories, poems, and engravings of pretty women. 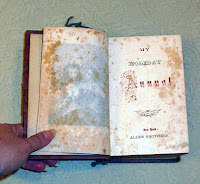 I've been reading the stories, and they're pretty funny--all about not-quite-beautiful country girls who grow up to marry very handsome wealthy men. 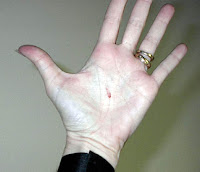 Although I did sustain one knitting injury, a needle into the palm of my hand, it was a great trip. 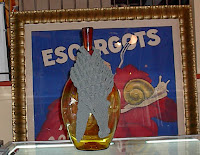 I even finished the gator scarf. Just in time for a 96-degree day.

_________________
*I'm not trying to denigrate oral history, but in this case, something definitely got lost in translation. I think I can discern the ur-theory in there--that Native American women tended to pick a certain type of print because it reflected some of their spiritual beliefs. That doesn't mean, however, that every print in that design is a documented print, nor that prints in other designs are not documented to the period
Posted by 7-letter Deborah, never a Deb at 5:25 PM

I love coming to your blog... I always learn something. Now, about that gator pattern...

Sara and I saw parts of that parade. I enjoyed your unique take on your Nauvoo visit!

The light was too bright and contrasty for architectural photos, but I did photograph a really old fire hydrant...

If you have been to the steamship Arabia museum and heard the theory they have on the fabrics and buttons, it's interesting to say the least. If you question their documentation they get all defensive and don't want to talk to you anymore....at least that's how they were a couple of years ago. Some people tend to believe that whatever "history" they want to espouse is good enough because most people dont know any better and will believe whatever they are told.