At the moment, Elizabeth Stewart Clark is raffling off a china doll for historic preservation. I believe she's done this at least once before.
Fund raising dolls were very popular during the Civil War. You can read a general overview at Virginia's Veranda (It's annoying, but you have to look for the link to the Veranda, then click on the article title. It's all embedded in frames).

There's some great images in the article, but an even better one appears on the cover of The Collector's Book of Dolls' Clothes: Costumes in Miniature, 1700-1929, which is out of print.*
This doll, which was raffled at a sanitary fair to benefit the troops, came with the following (roughly from left to right and top to bottom:

I am soooo not a doll collector, but doll fashions are simply miniatures of female fashions of their period. For me, the knitted items are of particular interest, so I bring you:

The wristers, which are ribbed in red and white.

The scarf and shawl--The shawl has a lacy center and a blue and white garter stitch border. The fringe is somehow twisted. The scarf is clearly in brioche stitch and the fringe alternates in red, white and blue as well. 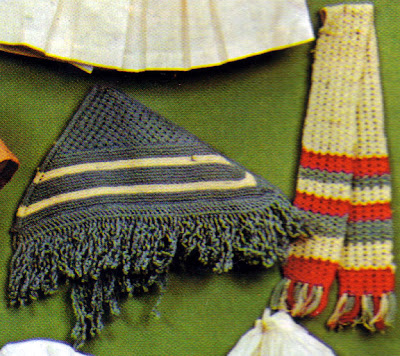 The red sontag looks like it's done in garter stitch. A sontag is basically a vest that wraps around the body. There's pattern after pattern of the time period giving directions on how to make faux ermine, particularly for bordering sontags. The sontag is tied with a cord made from braiding the red and white yarns together and is finished off with a tassel. 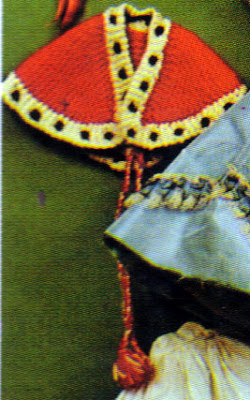 and finally, the blue sontag which is also done in garter stitch. 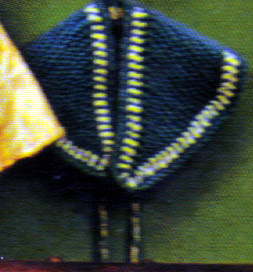 In these blow ups, it's easy to forget that these pieces might be only few inches long, or less in the case of the wristers. They're all veritable bug knits.

*Holy crap! Used copies on amazon are selling for $100, and there's the start of a bidding war right now on ebay, where it looks like they generally sell for about $50. I picked up mine for $7 at Goodwill. I don't think I can bring myself to cut loose of it though.